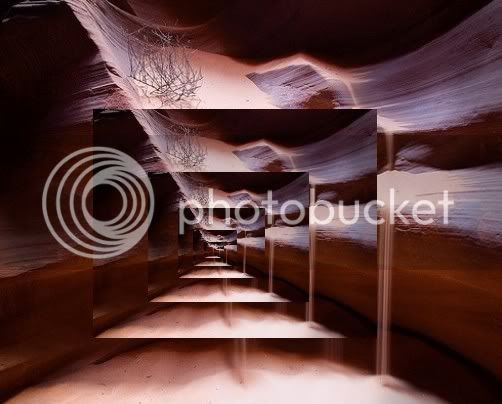 Escher had a lot of fun with the Droste Effect, too, which can be explained mathematically. If you loop a droste effect image, you can create a little piece of infinity, ala Rooney Design's Christmas Zoom Movie.

In fiction, we have a similar term -- mise en abyme* which is the practice of telling a story within a story. Usually this takes form as a character within the story telling a story, as Stephen King is quite fond of over-doing to the point of where I want to slap some duct tape over the mouth of every old guy who walks into one of his scenes. But for the sake of this post (and because the Dragon is not fond of French) I'll refer to the story-within-a-story device as droste.

If you look at them sideways, prologues and epilogues can be viewed as droste, as they're usually about what happened before and after the central story. Flashbacks, or prologue that is scattered throughout the story, is a form of droste, and so are those revelatory dream sequences. But the most common use of droste is usually delivered through dialogue as a character delivers backstory, a revelation, or something else that until that point has not been explained or made obvious:

Heather collapsed into the chair in front of the mirror, laughing until tears rolled down her satiny cheeks. "M-M-Morning Cloud?"

One of Nathan’s now-winged ebony brows rose. "It’s the special name I gave you when we were children playing together in the secret flower-covered meadow on the reservation where your father owned the general store and cheated my relatives for every dime he could get and beat you regularly but I still loved you and swore one day we’d be married which is why I’m defending you against the murder charges you were framed for."

Heather covered her face with her slim hands as her shoulders shook. When she could speak again, she said, "Hand me a beer, Running Bear."

"Whatever." She caught the can he tossed to her and drained it in five swallows. "I can’t keep doing this, pal."

Nathan’s other brow rose. "Oh, like I’m having the time of my life?" He stared at the pizza. "We haven’t eaten since Gena made us stop at the diner back in Nevada, and you threw your food at me --"

"That was to get you back for kidnapping me from the school for the retarded children where I was a much-beloved teacher and forcing me into your pickup truck and driving me out of the state before I could be arrested for the murder of my ex-husband who was never able to consummate our marriage due to an unspecified health problem and consequently treated me like dirt," she reminded him.

Aside from my little romance parody here (the rest of which you can read in my freebie Sink or Swim), these standard deliveries are all perfectly acceptable, and there's no reason why you shouldn't use them. But I think it can be fun to play with other forms of droste storytelling, and find new ways to incorporate these stories within the story without resorting to the tried and true.

Hand-written Artifacts: letters, journals, memos, reports, and all the other paper ephemera of life contain a lot of information, often in a neat package. Jane Austen was quite fond of having her characters write plaintive letters to each other to explain things, and in our generation we're seeing novelists do the same with voice mails, e-mails and texts. How about graffiti, shopping lists, or half-finished crossword puzzles? Anything written is game as droste.

Lyrical Fragments: Foreshadowing quotes from songs and poetry can be found in every other book on the shelf, but there is more to music and verse than Bob Dylan and Robert Frost. Consider the droste possibilities in opera, rap, chants, prayer, folk songs, marching cadences and meditations. And speaking of poetry, I'd love to see backstory delivered in original limericks, or haiku, or villanelles.

Everything in Print: we've all seen the droste newspaper headline or short article, but why not draw on other sources of news? Severe weather warnings or other community alerts that run across the bottom of the TV like ticker tape can be very dramatic, so can lab test results, a performance report, a page from a police blotter or a middle school student's typed science project outline (I used that one in Dreamveil, btw.)

When you weave a story within your story, you are in essence interrupting the reader, so the main point is to make it worth it. One of the most original and effective forms of droste storytelling I've seen in recent years were in Stephenie Meyer's New Moon, specifically pages 85 - 92 (hardcover edition). The pages list a single word -- the current month -- but are otherwise blank. They're not even numbered. This is because the protagonist, who narrates the book, is in such a terrible depression that she falls silent, and these pages are the only thing to tell us of her misery and that these months are passing -- without her or the author having to utter a single word.

Look around you and see if you can spot some unusual form of droste in your corner of the world. For a couple of weeks last fall I drove past one property whose owner kept in the front yard a hand-painted plywood sign with brief heartfelt messages for a woman we'll call Sandra, always punctuated with a blue heart, and positioned so they could be read from the road (obviously so she would read them whenever she drove past.) The messages were loving and G-rated, and could have just been a romantic gesture from a really cool guy, but it was the little blue heart that told me things were not so rosy.

I looked for and read the signs every time I drove past, and I still wonder if they disappeared because he gave up or they got back together. Maybe this fall he'll finish the story for me with a blue stork-shaped sign that reads It's a Boy!

*The French phrase was derived from a practice in heraldry of putting the image of a small shield on a larger one.
Posted by the author at 12:00 AM