A couple of weeks ago I got an e-mail from the folks at Scribd* telling me about their latest new venture; a real time notification thing like Twitter. They're calling their version "social publishing pages" that have "fun features that make it easy for you to share what you're reading and publishing with Scribd's community."

For the launch, they put together a list of prominent Scribd users that they encouraged people to start following. I've yet to see this list, but the e-mail claimed it included me. I was also issued somewhat ominous instructions for me to "log into my Scribd profile" and "respond to my Scribd readers soon."

While I was flattered that they consider me a prominent user, at no time was I consulted about any of this, or even asked if I wanted to participate. I guess because most authors jump at any promotional opportunity they assumed I'd hop right on the bandwagon.

I don't have "cripple" listed on my bio, so Scribd can be forgiven for not knowing I can't type or text. Even if I could hook up the Dragon to a feed of some kind for their new venture, to add that workload to what I already do on the internet would stretch me too thin. I give an hour a day to the internet; I can't spare any more time than that from my work schedule. But since this was a new thing, I thought I'd be supportive of Scribd's launch, see if I could get the Dragon to interface with that little box, and respond to a couple of twits. Until I went to my new Scribd home page, and how many "followers" had subscribed to my account: 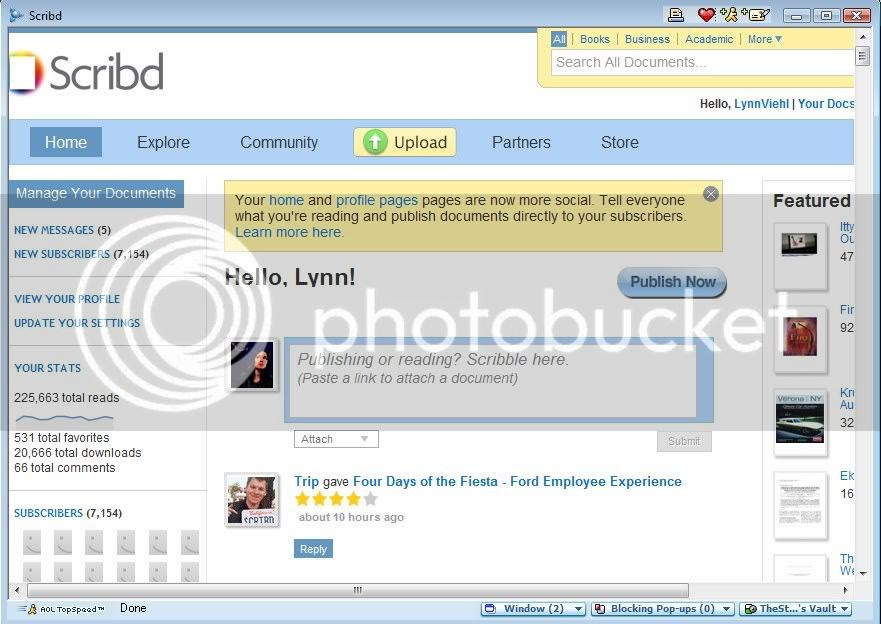 I can't count how many new notifications I've received -- from all the pages I've waded through, about half of them look to be SPAM -- but as of the writing of this post, 8,516 people can twit me and it shows up on my home page (1,362 more than I had when I took the screen shot for this post a couple days ago.)

Obviously the promotional value of this new venture is attractive for an author, because who wouldn't want to text nearly nine thousand interested readers about a new release hitting the shelves or some other bit of marketing? But as with Twitter, the new social stuff is supposed to be reciprocal -- they twit you, you twit them, lather, rinse, repeat. I can't do that and have enough voice left over for the writing I get paid to do.

As with anything that threatens my writing time, I've grown extremely wary of this new social media fad. It appears to be as addictive as it is time-intensive. Writers I know have complained to me that they now spend upwards of four hours a day twitting or twitting back to people who twit them. By the time they try to do some actual writing, they're mentally exhausted.

I know the lure of all that "What did she say about me? What did he say about her? Know what I said about them?" is seductive, but it doesn't pay the bills. For example, this week I didn't produce a single twit, but I did sell two books for major money and I condensed a pitch for another interested editor who might be buying three more from me. I also wrote five new chapters of my novel and cleaned most of my house. Go ahead, hate me.

I've notice a few writer blogs out there have been converted to Twitter feeds, and this depresses me. While some people like to read one-sided conversations, for me it's about as interesting as overhearing one side of a cell phone call. Honestly, I'll change lines at the grocery store so I don't have to listen to that. Come back to your blogs and write something real once in a while, please.

I really don't want to tinkle on the Twitter parade any more than I wanted to mock the MySpace trend or make fun of the FaceBook furor. I think (like all indulgences) twitting is probably good for writers in moderation (or at least partially justifies what you're paying for unlimited texting.) The upside to Twitter (and now Scribd's social notification feature) is that it requires writers to actually do a little writing. Until they figure out a way to hook up some feed to their Twitter account that doesn't require any keyboard time . . . .

**Note 9/3/10: Since Scribd.com instituted an access fee scam to charge people for downloading e-books, including those I have provided for free for the last ten years, I no longer use or recommend using their service. See my post about this scam here.
Posted by the author at 12:00 AM