I've been keeping some form of personal journal almost daily since 1974, when my parents' marriage melted down. There were so many things I wanted to say that under the circumstances I couldn't, so having a journal gave me a place to let them out safely, without hurting anyone's feelings. After that my journal became the place where I could retreat and work things out on the page, which in turn helped me with my writing.

Now when I give my workshops on writing as a career at the local schools, I make up and hand out blank journals to all the kids. A journal invites artistic expression and emotional exploration as well as trains young writers to write daily, something that never hurts later on when they decide to pursue publication. 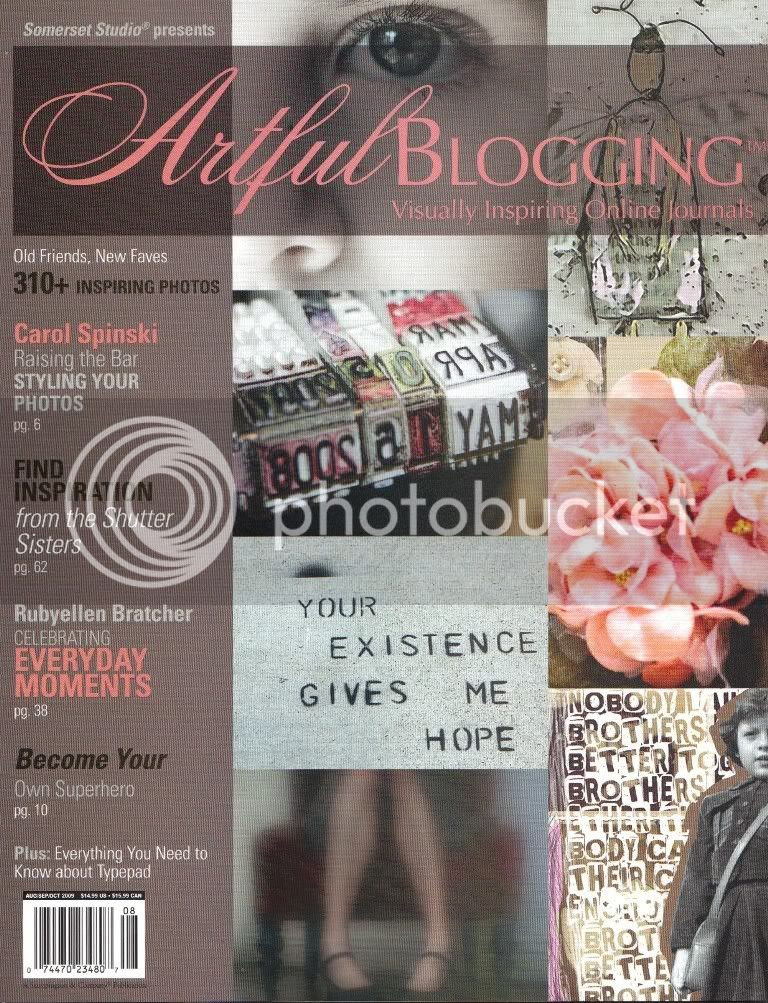 As far as inspiration for journaling goes, I like unconventional sources. Artists, for example, have long inspired writers (without them we wouldn't have The Da Vinci Code, Red Dragon, or The Girl with the Pearl Earring.) Composing a story after being moved by something we've seen is probably the foundation of a million novels.

Four times a year Stampington & Company's Artful Blogging magazine takes a look at the flip side of the equation: the artists out there who are writing via blogging. The results are not always at what we'd consider professional level, but rather spring pure and uncluttered from the artistic mind. The artful bloggers collectively don't nitpick and worry over every word the way we often do; they tap into their emotions and motivations and free them on their blogs. The magazine never fails to rejuvenate me in some way; from this issue I took a quote from the cover art and ran with it. 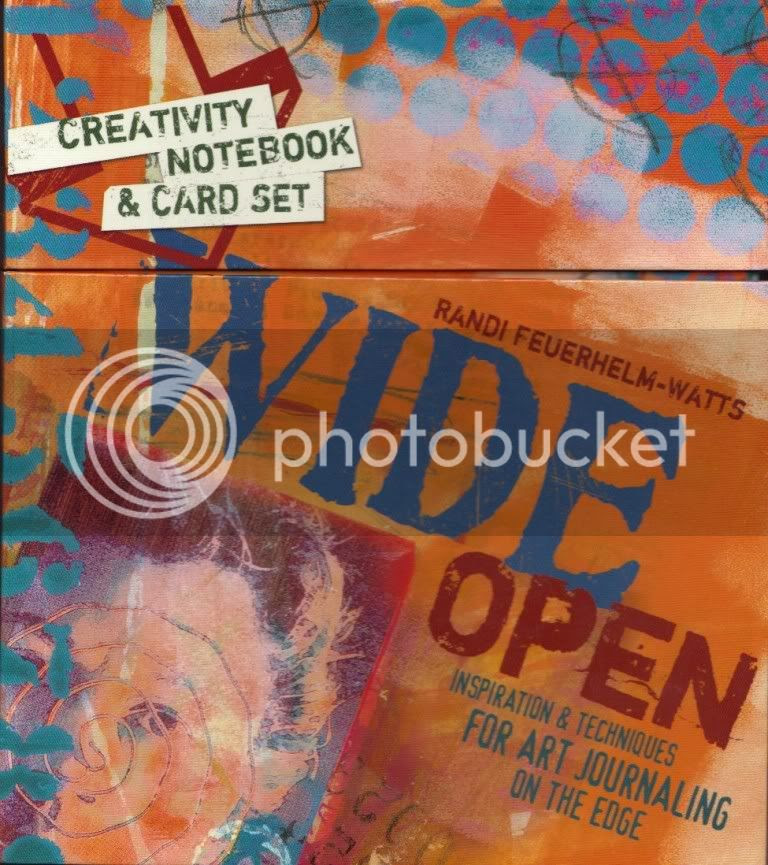 Sometimes it's fun to work with a guide, and you can get a directed journal or journaling kit like Randi Feuerhelm-Watts's Wide Open Creativity Notebook & Card Set to serve as your navigator. This boxed set comes with fifty cards with art journal images on one side and stories and writing prompts on the other. There's also a partially-written journal with more of the same, along with plenty of blank pages for the writer to fill in.

I bought this kit because I wanted to stretch my wings a little. I have a problem with some mixed-media and spontaneous artistic journaling -- all that untidy scribbling and scrawling just looks messy to me -- so I thought it would do me some good to walk on the not-so-organized side. I'm still struggling with my neatness fixation, but some of the anecdotes that Ms. Feuerhelm-Watts has on her card set are fascinating. For example, she tells a little about outsider artist Annie Hooper (1897-1986), who wanted to be a romance writer, but ended up the stay at home wife of a fisherman. To pass the time she spent alone, the childless Mrs. Hooper made over 25,000 dolls based on Biblical figures, which filled nine rooms of her house. Some of her dolla are now in the collection of North Carolina State University's Gregg Museum.

25,000+ dolls, whew. Makes me wonder if she was the inspiration for that doll-collecting character in King's The Tommyknockers. 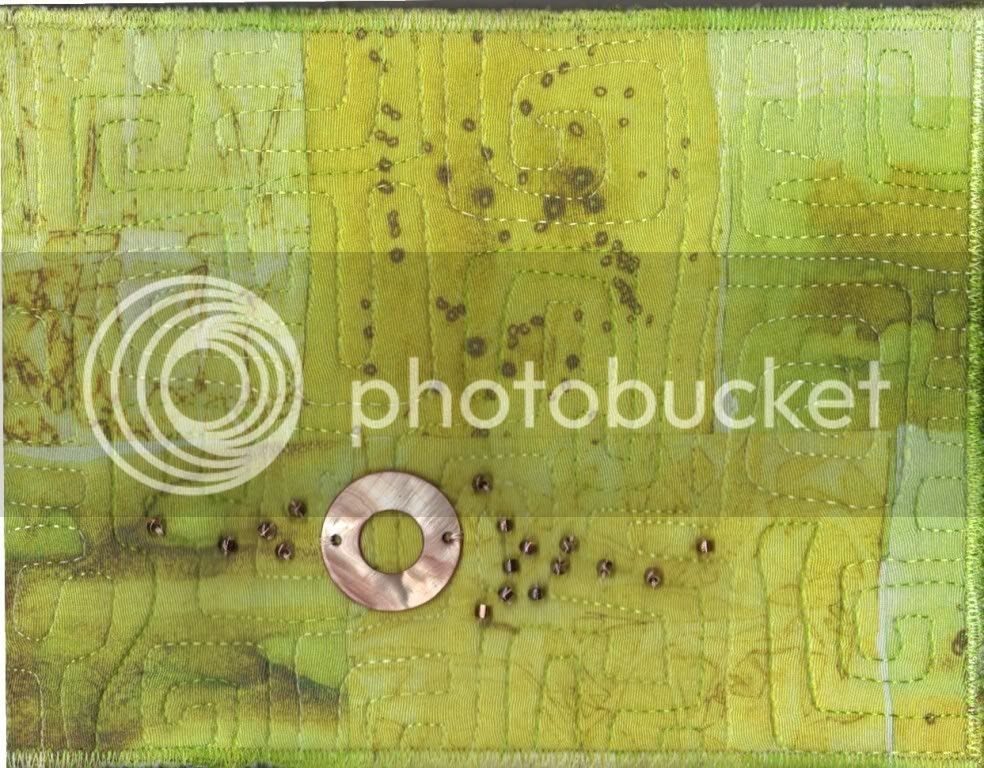 I make most of my own journals now, but every now and then I'll purchase a journal or sketchbook that catches my eye. I like supporting artists directly whenever possible, so I shop at Etsy, the grand central station of everything handmade you could ever want that can't be found in stores. Here's a cool green quilted-cover sketchbook made by Florida artist Lolita of Daily Threads. I really like her work and it definitely inspires me.

For writing journals, I've just discovered Afiori, an Etsy shop owned by Swedish artist Maria-Thérèse Andersson, who made the writing journals I'm currently using, which are just the right size for my purse and packed with different sizes and types of paper. They're also not as intimidating as a big journal filled with nothing but blank ruled pages; the colors, textures and different page sizes help spark new ideas.

If you've never tried personal journaling, my advice is to start small. A twenty- or thirty-page journal is going to be easier to fill up than a two hundred-page monster. There are no rules as to what we write in our journals; give yours a theme like "Things I will never say out loud" or "Favorite names, lines and places." If you're feeling word-challenged, fill your journal with photos and magazine pictures and simply write a few words beneath them as to who they are, where you found them and/or how they make you feel.
Posted by the author at 12:00 AM