Ten Things That Happened at My Booksignings

1. I met a Very Famous Author's ex, who decided to confide in me. A lot.

Some pretty decent stuff, too. The lives I could ruin . . .

2. I was asked what I saw when I was assigned to Area 51. When I said that I had never been there or worked there, I was accused of being part of a military conspiracy.

The manager rescued me and escorted the deranged gentleman out of the store.

3. I was cornered in the ladies room by two lady fans, one of whom hugged me so hard my neck cricked.

After that, I learned to go before or hold it.

4. A woman handed me her infant so she could get my book out of her purse, and the baby's diaper was leaking.

It was only a silk suit.

5. A fan who was also a cop ran my tags to see if I really was the S.L. Viehl. Then he told me, just in case I was worried.

Be nice to your cop readers. They can be spooky, and they carry weapons.

6. An ex-boyfriend showed up after twenty years to tell me he should have married me instead of dumping me for the Girl Most Likely to Do Everyone. He's in insurance now and has four kids.

I would like to point out that I did not fervently thank God until after he left.

7. Another author spit in my face. Accidentally.

That's what he said, anyway.

8. I had a sudden, violent reaction to my arthritis medication and ran into the closest room, the manager's office, to throw up in her trash can. She thought it was nerves and offered to cancel the booksigning.

I cleaned up the mess, went to gargle (she had a little sample thing of mouthwash in her purse) and went back to the signing.

9. I received two dozen blazing orange roses in a Chinese vase and a lovely but cryptic note card from someone who felt I had done something wonderful for them.

Never found out what I'd done, or who I'd done it to. Anyone want to confess yet? 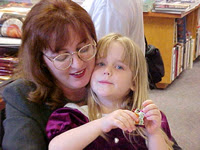 Yeah, but I made her wear that dress.
Posted by the author at 7:01 AM