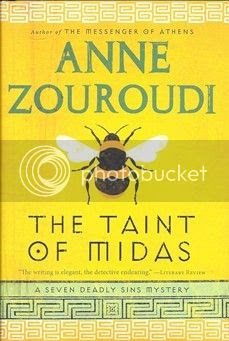 My pick for November's book of the month is The Taint of Midas by Anne Zouroudi, one of the books I found at my local dollar store back in October. This is the second novel in a mystery series featuring Hermes Diaktoros, a Greek detective who investigates the death of an old beekeeper on the island of Arcadia. The series also follows the theme of the seven deadly sins, which if not exactly original provides a decent sense of continuity among what are likely standalone books.

If you're not immediately enchanted by the lovely writing and the realism invested in the characters, this tale may seem a bit melancholy at first (and those of you who are avid tourists of Greece might want to fasten your seatbelts -- it definitely doesn't cater to you.) I stuck through the sadness to follow the puzzle, which is as clever and convoluted as anyone could ask, but I think the secondary characters are what really grabbed my heart. This novel is populated with so many absorbing characters to fall for you'll have a hard time deciding which is your favorite (mine is Sostis, the fishing barber.)

The Taint of Midas also whisked me back in time to the old days of reading mysteries at the libraries I haunted as a teenager. I couldn't get enough of Evelyn Anthony and Virginia Coffman and P.D. James in those days; they were my Agatha Christies. I especially loved stories that took place outside America because they gave me a window to the rest of the world and cultures that were very different from mine. There's so much respect for the craft and the characters and the conflict in those old mysteries; they weren't just thrown together but built carefully, and with a lot of thought and affection and investment by the writers.

Author Anne Zouroudi carries on that tradition beautifully. Now that I've discovered this writer I will definitely be investing in the rest of her series, which should offset the fact that I got this book so cheap.
Posted by the author at 7:00 AM

Labels: book of the month