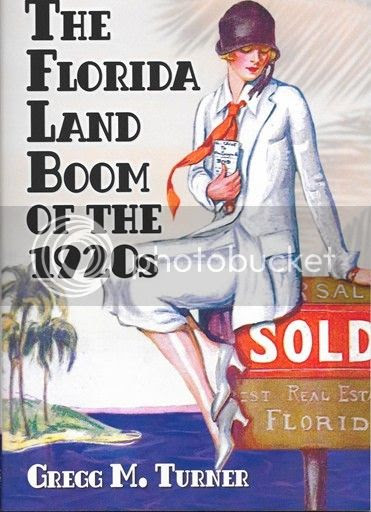 My third book from Library Thing's Early Reviewers program was The Florida Land Boom of the 1920s by Gregg M. Turner. A historian who has already written a number of books about the state where I grew up, Mr. Turner this time tackled a period of land development and real estate that built and destroyed fortunes, transformed a tropical backwater into a much-desired destination, and attracted millions hoping to find paradise and make their dreams come true.

Land booms in Florida are definitely regular events. My family moved from Maryland to South Florida during one, while my guy and I later moved away to escape some of the many problems caused by another. On average 803 people currently move to Florida every single day, which last year helped push the state past New York to become the third most populous in the union (only #1, California, and #2, Texas, presently have more residents.) Twelve hundred miles of beaches certainly don't hurt, nor do the very low taxes (Florida ranks fifth in the nation for states with the lowest tax burden.) Close to ninety million people simply visit Florida every year to work on their tans, take the kiddies to Disney World, Universal and a plethura of other theme parks, and otherwise bask in the Sunshine State.

From the beginning of the book I was impressed, not only by the author's meticulous research, but also by how he explored the fascinating people involved. We can thank developer George Merrick, for example, an aspiring writer who dreamed of building a "City Beautiful", for Coral Gables, and world traveler and (admittedly unlicensed) architect Addison Cairns Mizner for Boca Raton. Sarasota owes quite a bit to circus king turned developer John Ringling, who came on his yacht to visit the city after being snubbed by high society in nearby Tarpon Springs. Yet for every visionary there were scammers and criminals waiting to rip off and defraud the unwary; after being sentenced to prison for investment fraud in Massachusetts the infamous Charles Ponzi worked a scam to sell ten million building lots to investors that were too tiny to build on, located in the middle of nowhere, or drowning in swamp water.

This book is also chock full of fascinating advertisements and photographs related to Florida's 1920's land boom, and the men who drove it. I think reading the original ads used to lure new residents to the state are the most fun. The promises these guys made were often even more outrageous than their plans. The one thing they didn't mention in addition to the balmy sea breezes and warm winters was hurricane season, or how often Florida is hit by these monster storms. A category 4 storm made landfall in 1926 to wipe out greater Miami, cross the state and ravage the west coast, and then zip up the Gulf to batter the panhandle. Just one storm killed 400 people, injured 6,300 and rendered some 18,000 homeless.

Gregg M. Turner does a terrific job of pulling together bios, backgrounds, business ventures and thousands of little details to portray this chaotic and ultimately very costly time period. Students of Florida history should definitely invest in it, but it's a pleasure to read for anyone who loves the richness of the past, the mistakes our predecessors made in those times, and what we all might learn from them.
Posted by the author at 9:00 AM