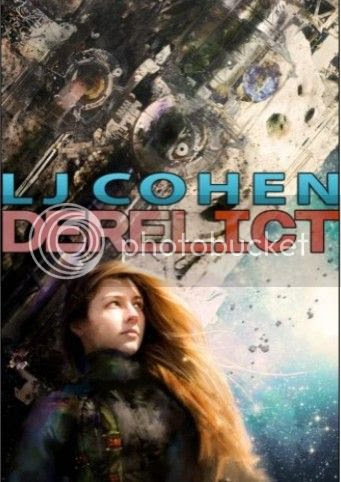 A little over a year ago I first read Derelict by LJ Cohen, and it impressed me so much I not only gave it a quote I even wrote a ten things list about it. It came into my hands exactly at the precise moment I needed a wonderful read, too. At the time I was beginning all the lab work and prep stuff for the first of my two eye surgeries, and Derelict provided a terrific and very necessary escape from all that. Now that the sequel, Ithaka Rising, has just been released I decided to take a trip back to my first experience to revisit this amazing universe by having another go at Derelict.

I remember my strong first impression of the novel came from being immediately hooked by how smart, engrossing and interesting the story begins, and that happened again. As a writer I appreciate that elusive, page-turner magic because I know how difficult it is to capture, and as a reader it's absolutely what I want when I hit the first page. Don't give me a weather report, make me burn dinner. Fortunately I wasn't cooking when I began Derelict or something would have scorched. Same again this time -- I deliberately waited until I was not operating any electrical appliances when I began to read and lost myself in the story.

I think on this read I appreciated the diverse cast a bit more. When you're first introduced to each of the characters you become absorbed in the immediate aspects of their particular personalities and conflicts. I loved on the first read how real they felt on the page, but this time around I knew them and so noticed the less obvious elements. Ro, the protagonist, is very intelligent, driven, and rather cold, but it's a facade, and this time I spotted more glimpses of her vulnerabilities. The same with Barre, the musician son of physicians who always comes up short when compared with his brilliant baby brother -- until his innate ability to compose music enables him to do things the other characters can't. I felt much more sympathetic to Barre this time around.

Halcyone, the derelict ship in the story, also took on more depth for me. On my first read I was caught up in the adventure, but the second time around I knew what would be happening and paid more attention to the details around the action. Those little things that I zeroed in on this time allowed me to better visualize the ship, which made every scene more colorful and alive for me, and in turn enhanced the action. As a result I'd say I probably enjoyed the book this time more than the first read-through.

The feel of the novel once more transported me back to my young teens, when I read every A.M. Lightner book I could borrow from the school library, so it definitely works as a YA. At the same time it doesn't read like most YAs that shove that too-young, over-the-top teen angst in your face. The young cast in Derelict are not standing around wondering what he said or she said. They're dealing with very serious situations in their lives, and while they act their ages they also resonate with me as an adult. I know how Ro feels about being awkward with people because I'm the same, and the age difference doesn't matter. Jem's tireless and sometimes overwhelming enthusiasm for advanced programming rings true with me because I feel the same about my art.

I'm glad I took the time to read Derelict again, because I've just ordered the paperback of Ithaka Rising and I want to see what happens next with Ro and the crew. Tomorrow I will also have a Q&A interview with Derelict's author, so if you'd like to find out more about LJ Cohen, stop in. And if you haven't yet taken the first wild ride on Halcyone, Derelict for Kindle is less than a dollar right now, so click here to get it for a song.
Posted by the author at 7:00 AM