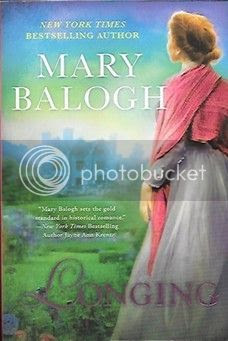 Mary Balogh, one of my all-time favorite historical romance authors, recently published a new edition of her 1995 novel Longing, and since it has been about twenty years since I first read it I decided to revisit it this month to see how it holds up after two decades.

Here's the copy for Longing:

The illegitimate daughter of an English lord, Sian Jones abandoned her heritage to live in a stalwart coal mining community in South Wales. Empowered by their cause, she’s engaged to be married to the leader of a revolutionary movement that is bracing itself against the tyranny of English mine owners. But Sian’s principles are unexpectedly shaken when she accepts a job as governess under Alexander Hyatt, the mysterious Marquess of Craille, the oppressive symbol of everything she has come to resist. She never expected Alexander to upend all her expectations. He is sympathetic to her cause. He is a loving father. A man of wealth and position, he is fatally attractive. And he is offering his heart to the independent woman who has illuminated his life. Now, caught between two worlds, and between the promises and desires of two men, Sian must make a choice that will define her future — one that can only be made in the name of love...

Now onto my backstory: in the mid-nineties I was staying at home with two little ones in diapers, and with only their dad's income to support us we lived on a very tight budget that did not allow for lots of book purchases. So once a week I would go to the library to pick up books to read during naptime or after the kids went down for the night. Longing came home with me on one of those trips. I'd read only a few of Mary's books back then (the first I read was Dark Angel, which knocked my socks off) but I was already hooked on her lovely writing style. This story was also set in Wales, about which I knew absolutely zero, so I considered that a bonus. 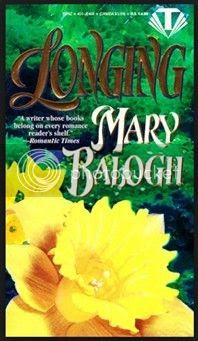 I remember reading it slowly while I mentally tried to sound out all the odd Welsh names and words, too. When I finished it I felt a bit walloped. The story was very emotional as well as very non-traditional in how the romance (more like a romantic triangle) played out, and in the HEAwful era of the 90's it was quite refreshing. It also had an intense cast of characters that stayed with me a long time after I finished the story. When I returned it to the library I promised myself I'd buy a reread copy for myself the next time I was at the used book store.

Actually I never did get a copy of Longing for myself (another long story), so I was quite pleased to see it back on the shelves with its pretty new cover art. I think as soon as I began reading it I remembered that walloped feeling superimposed over a similar experience I had when I saw BBC's production of Elizabeth Gaskell's North and South for the first time. While Longing has a different setting, plot and characters, much of the emotional stakes in both stories had the same effect on me. Now that I've written 50+ books of my own, including a few like Dreamveil and Disenchanted & Co. that have more than one hero, I can also personally appreciate how tough it is to publish a story that features multiple romantic interests that last longer than the usual two pages.

Longing definitely held up very well after a twenty-year reading break, and for those of you who didn't get a chance to read the original release I can definitely recommend it as an excellent choice.
Posted by the author at 7:00 AM