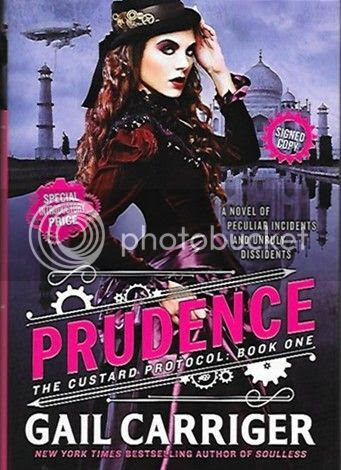 I skipped doing a book of the month post in February because I had time to read only a couple of books and my favorite was actually a cook book (plus I was feeling too blue about Leonard Nimoy passing to work up the proper amount of enthusiasm.) I did make more of an effort to read in March, and my pick for the book of the month is Prudence ~ The Custard Protocol: Book One by Gail Carriger.

You don't have to have read Gail Carriger's The Parasol Protectorate series to follow this story, although if you have then you're in for a treat. Prudence is the first novel of TPP's next generation in this delightful Victorian steampunk alternate universe. The protagonist is none other that Lady Prudence Alessandra Maccon Akeldama, the daughter of TPP's Alexia Tarabotti, whom we last saw as Alexia's mischievious abilities-stealing infant. She's also the adopted daughter of Lord Akeldama, London's ever-dazzling, always-fashionably brilliant vampire.

Prudence -- now known as Rue -- is all grown up, and about to set off on her first adventure with her best friend Primrose, Prim's bookish brother Percy, and the utterly too rakish French engineer Quesnel Lefoux, all on board a fantastic dirigible run by the most charming (if not perfect) crew ever to take the skies. How to describe Prudence as a story . . . you're in for a romp that twists and turns like The Spotted Custard (the name of Rue's airship, which resembles an enormous ladybug) as it floats off to India in search of adventure, tea, intrigue -- and finds all that and quite a bit more.

I picked this book because it made me continually laugh out loud while keeping me on the edge of my seat, especially in the second half of the novel when things go from very interesting to Holy Cow, how is Rue getting out of this mess? As fond as I am of all the characters from TPP, and loved seeing some of them show up in the story, I really enjoyed the quartet of Rue, Prim, Percy and Quesnel. As a team they're definitely original and endlessly entertaining, and I can't wait to follow their adventures in the next book.
Posted by the author at 7:00 AM