Here's a contradiction: I rarely write in books, but I love to find writing in books. I think the former is because I read mostly library books when I was a kid, and I didn't want to get in trouble with the library ladies. The latter is like spying a bit on the book's former owner and finding out something about them.

Sometimes I find notes in books that really intrigue me, such as those I discovered when I purchased a 1958 edition of Edmund Spenser's poetry. Inside the front cover some reader before me wrote this: On the opposite/title page are some fainter, different notes in pencil (some of which I've typed out beneath them): 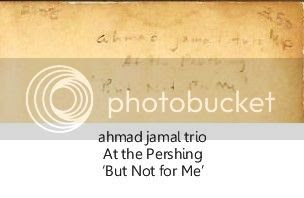 I didn't recognize any of the words except the Pershing, which I thought used to be an old gangster hotel in Chicago back during the Capone/Prohibition era. I never bothered pursuing the meaning of the words, but after author Kris Reisz made a very interesting discovery about one of his old books I decided to research the notation and see what I could find out. Which lead me to this recording over on YouTube and this article over at The Wall Street Journal.

I didn't recognize the notation because I'm definitely no music expert; the jazz in my own collection is primarily limited to sax wizards like John Coltrane and Charlie Parker. Still, it was very cool to discover Ahmad Jamal, listen to his music, and find out how he and his trio changed so much with their live album.

Have you ever tracked down something you found written in a book? Let us know in comments.
Posted by the author at 7:00 AM