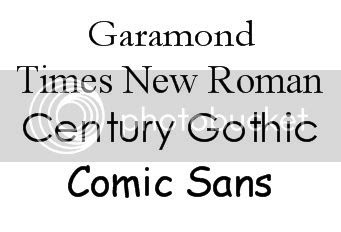 As a science fair project, 14-year-old middle school student Suvir Mirchandani discovered that switching to Garamond as the typeface font for printed documents could save thousands in the cost of ink -- and on a larger scale, millions:

"Ink is two times more expensive than French perfume by volume," Suvir says with a chuckle. He's right: Chanel No. 5 perfume costs $38 per ounce, while the equivalent amount of Hewlett-Packard printer ink can cost up to $75.

The young teen theorized that his school district could save as much as $21,000.00 by switching to the thinner Garamond, which uses less ink, and went to do the same math for the federal goverment:

Using the General Services Administration's estimated annual cost of ink -- $467 million -- Suvir concluded that if the federal government used Garamond exclusively it could save nearly 30% -- or $136 million per year. An additional $234 million could be saved annually if state governments also jumped on board, he reported.

So will everyone switch over to Garamond to save all that expensive ink? Probably not -- but I can tell you from now on I'll be using it instead of Times New Roman or Arial for what I print out.

Related links: Make your own fonts for free with Fonstruct
Posted by the author at 7:00 AM