Joy, Not So Much

Writers are always searching for the perfect pen, so I was quite interested when my friend Jill told me about a lovely commercial she saw for InkJoy, Paper Mate's "revolutionary" new retractable ink pen that promises "effortless" writing. Evidently these pens are so wonderful they practically write by themselves (as they did in the commercial, Jill insisted.) Since I have yet to find an effortless inexpensive writing instrument, and the arthritis in my hands makes finding one a perpetual quest, I had to check them out. 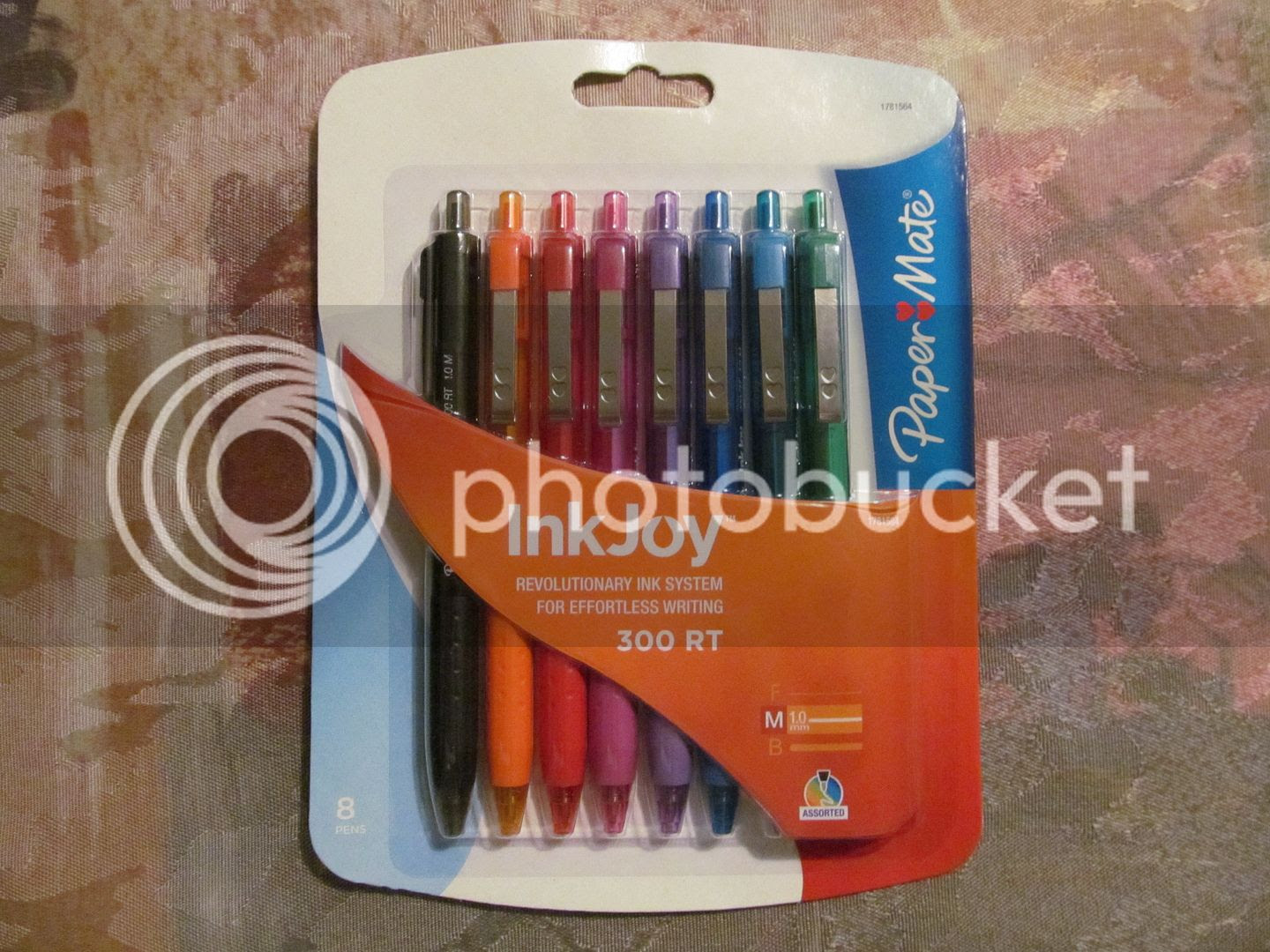 I found two different eight-packs of InkJoy pens at my local CVS store; one set of all-black and another with multicolor inks. As you see here, I bought the latter on sale for $3.99 and brough them home to test drive them.

According to the little story on the back of the package, Paper Mate designed Inkjoy to start "quickly without dragging" and writing with these pens "requires minimal pressure from your hand, and delivers crisp, clean lines every time." They also note "We hope that you feel the joy whenever you write with an InkJoy pen." I'm always prepared for writing joy, so I opened the package and tried out all of the pens. 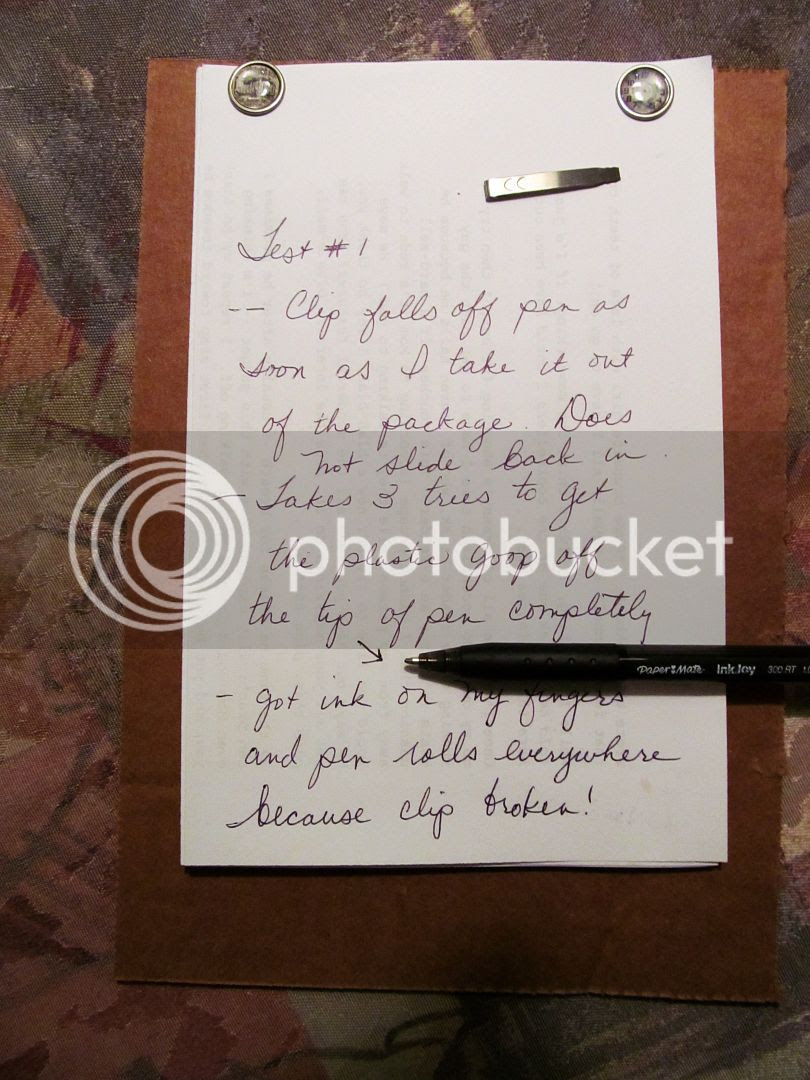 As soon as I took out the black InkJoy pen the metal clip fell off, which was not a promising beginning. I tried a couple of times to wedge the clip component back in place with no luck. Then I discovered a small ball of soft, waxy goop on the tip, aka the "tip seal" the package claimed preserved the freshness of the pen. Unfortunately this substance had partially melted into the end of the barrel and took me three tries to remove completely. This resulted in ink smeared on my fingertips, something I did not find especially joyful.

The ink did start immediately once I put pen to paper, and flowed a bit better than most ball point pens I've used. Whatever substance or chemical Paper Mate used to make this joyful ink flow has a distinct smell I noticed immediately, rather like ballpoint ink on steroids. Disclaimer: I have a pretty sensitive nose so the ink stink may not bother most people. 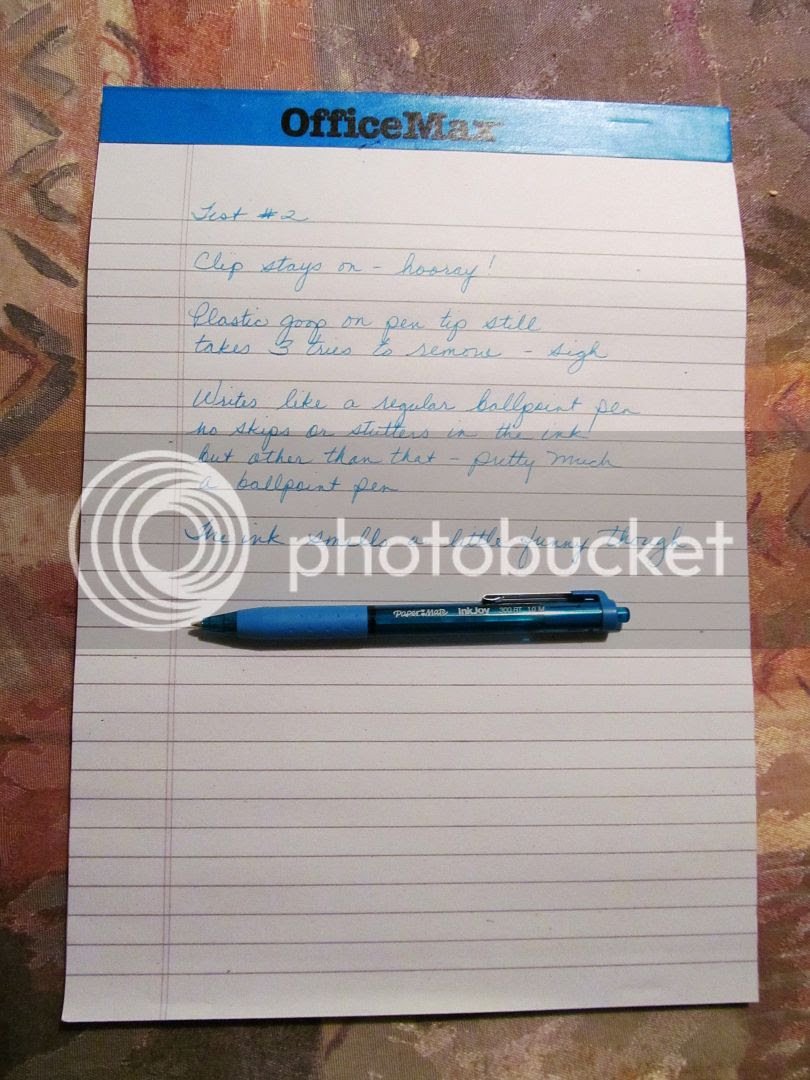 I tested the light blue InkJoy next on a pad of writing paper, and again the waxy tip seal ball had partially melted into the barrel and took three tries to remove (wrestling with these tips seals obliged me to stop writing and go wash the ink off my hands several times, also not particularly joy-inspiring.) The ink of the light blue pen had the strongest smell, and the color itself was odd and a bit too light to be practical for writing purposes. 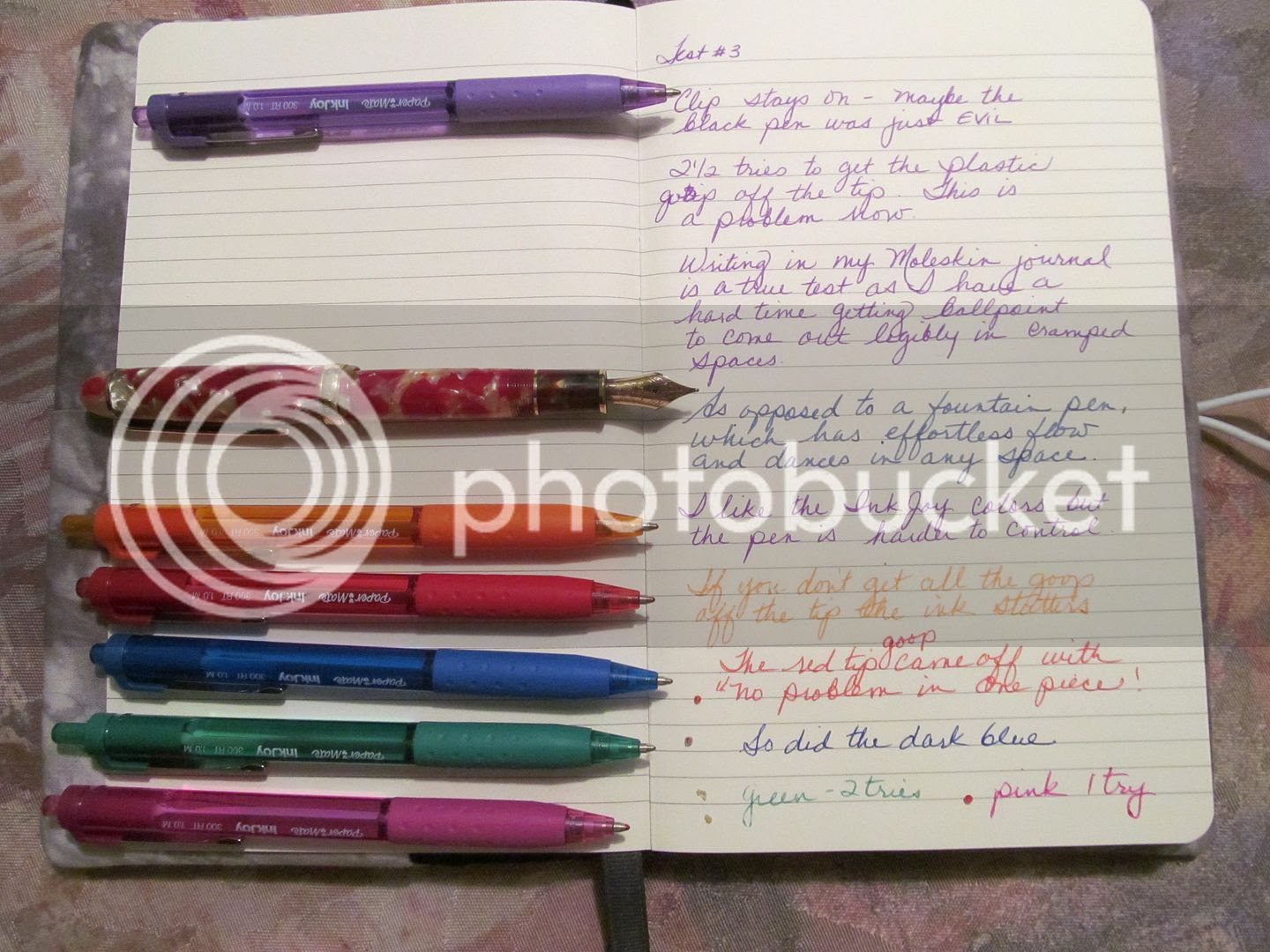 I then put all the pens to the ultimate test by using each in my current Moleskin writing journal. I love Moleskin journals, as they're beautifully made and have perfectly smooth pages, but the narrowness of the lines make them a challenge for me to write in. The ink continued to flow well from all the pens, with some globiness here and there. Pen weight and grip comfort does factor in when you're writing, and the lightness of the barrels and the plastic guards above the pen tips (if these are supposed to provide comfort, they're a total fail) didn't really help in that department at all.

I stopped using the InkJoy pens to switch to my Platinum Koi fountain pen, which is the most effortless pen I own, to compare the feel. The difference between InkJoy and my Koi in writing ease were pretty startling; the cramp that was beginning to set into my hand disappeared with the Koi, along with a lot of my tension. Disclaimer: the Koi has been my most faithful, dependable writing instrument for the last ten years; it has among other superb features a 14k gold nib, and a new one retails for about $300.00, so a 50₵ ball point really hasn't a hope in heaven of competing with it. 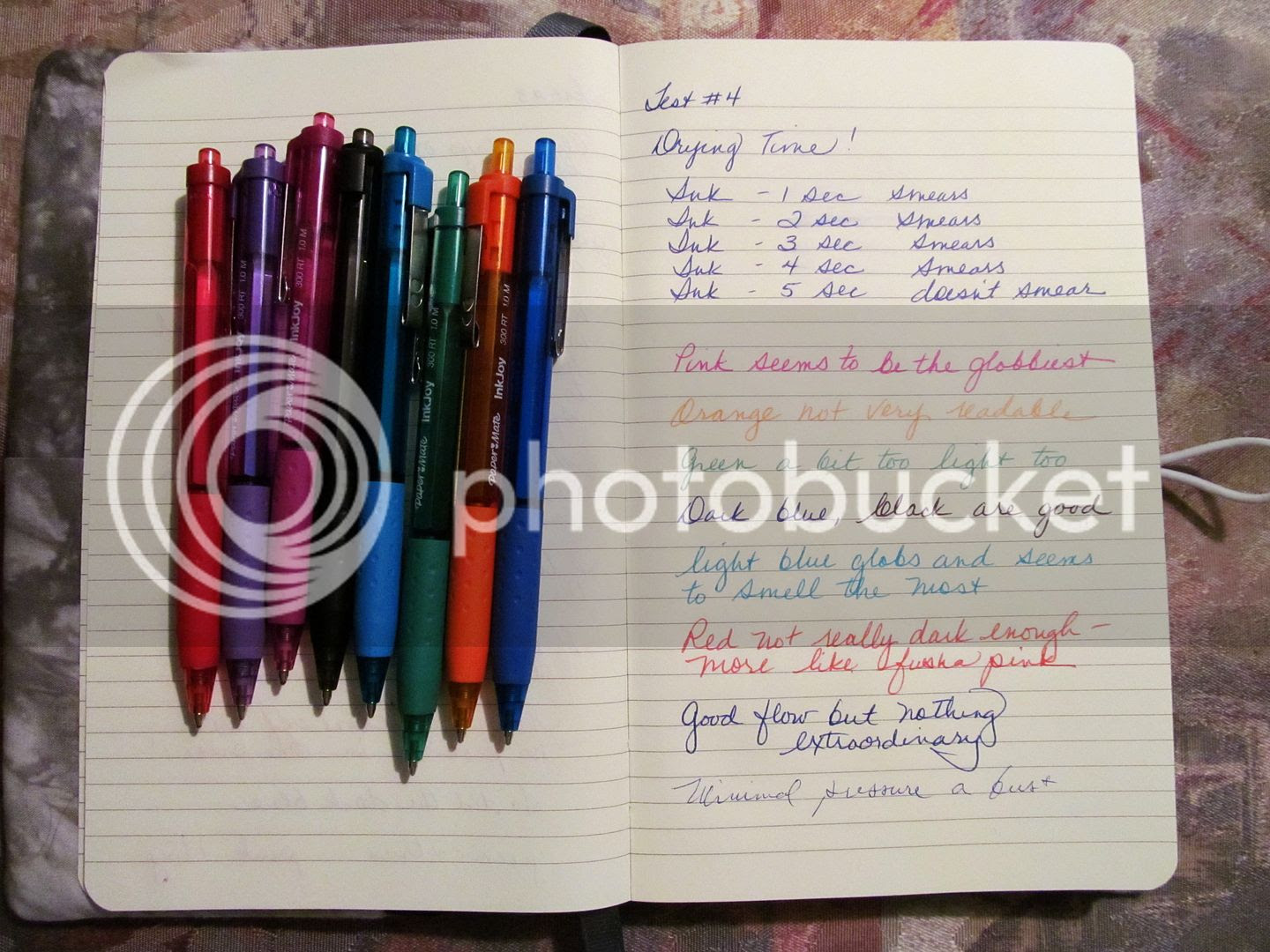 The colors of the ink were hit-and-miss for me. I liked the black and dark blue, which were the basic standard color of all ball point pens, but the other colors not so much. The red pen was not really red but more like a dark fuschia, which annoyed the hell out of me. I want red, not dark pink. The orange pen's ink was so light it rendered what I wrote almost unreadable. I then tried a smear test, and discovered the ink doesn't dry instantly. If you don't want to smear what you've written, you have to wait about five seconds for InkJoy to dry.

At no time during my testing of InkJoy did I experience a single moment of joy. Lots of annoyance, yes, a couple of moments of real aggravation, yes, but actual joy, nada.

I took apart the orange pen to look for the revolutionary ink technology I'd been promised, but found the components to be identical to any disposable ball point pen. Since InkJoy didn't deliver on most of Paper Mate's promises -- I think the pens really only provide decent ink flow, assuming you can get the tip seals off without tearing out your hair -- and you can usually find much bigger packs of ballpoint pens at your neighborhood dollar store, I can't recommend them as a good buy.
Posted by the author at 7:00 AM