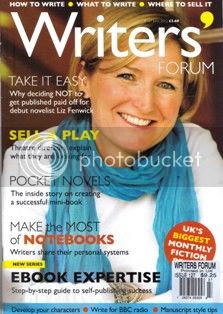 I'm currently reading the June '12 issue of Writers' Forum, a UK trade mag for writers that I found while rifling through the racks at my local BAM. Why it was there I can't say, except that this one BAM carries a nice selection of international mags as well as the usual domestic suspects.

The majority of the articles are geared toward working writers, which I liked, and while there were a few of those "Make Millions Self-Pubbing" ads the content was very refreshing -- like The Writer used to be before they went the way of Writer's Digest. There was even an article spread on using notebooks -- the write-in kind -- in different ways to aid with the work. Made me tear up a bit, to be honest.

Writers' Forum also holds a monthly fiction contest with three prizes that sounds interesting. There's a small entry fee involved (discounted 50% for subscribers) but since the magazine awards three prizes (£300, £150, and £100 respectively) each month, it might be worth it to subscribe if you're a short story writer or actively pursuing the UK markets.

In this issue the judge of the mag's monthly writing contest wrote an article on why she chose the entries that won, and in a box provided a checklist of what the mag is looking for as far as winning stories: "Originality ~ Good storytelling ~ Pace, momentum, immediacy ~ Attention-grabbing openings ~ Satisfying endings ~ Action ~ Convincing characters with their own voices ~ viewpoint control."

The judge's checklist made me ponder what I think kills a short story, which led to me putting together my own list ala the seven deadly sins:

Convention Skirt-Flouncing: How do I describe thee? Let me count a few ways: the writer refuses to use quotation marks; surreal elements that have nothing to do with the story pop up randomly, like great big honking pink elephants; there's a chick with green hair who isn't a blonde who just got out of an over-chlorinated pool -- you get the general idea. Yes, to some it's artistic, it's tres chic, whatever; it doesn't work for me. Most of it comes off less like style and more like posturing. If you're more worried about what people think of you than the story, this might be a problem.

Dull Characters: There's hardly any time for me to get to know the story's population, so in some way/shape/form they'd better knock my socks off from page 1. Too often they simply don't. To figure out if your characters are absorbing, give someone half the story and see if they come after you demanding the rest of it right now or they'll hurt you.

Improper Length: Any story over 15K words always feels to me like it's trying to be a novel, it wasn't enough to make into a novel, or it wasn't edited properly (sometimes all three.) On the flip side, unless they're perfectly structured very short stories (usually under 2K) feel unfinished. A litmus test for this is if your reader feels bored halfway through (too long), or pissed after reading the last paragraph (too short.)

Sketches Instead of Stories: About half of the short stories I read disappoint me because they're glorified character/event/setting outlines or narratives instead of real stories. The big tell for this is when you take a hard look at the action -- if you reach the end of the story and realize nothing has actually happened, you may be sketching instead of storytelling.

Tellers: the writer is so proud of the neat things that they've invented that there is no story, there's just the writer nattering on about all the stuff they think is cool. The red flag for this one is how many pages you've filled with narrative. More than 60%? Possibly a teller.

Unsympathetic Buttons: The writer wants my sympathy for an unsympathetic situation. Example: it's so horrible to be rich, privileged, summer in the Hamptons, winter in Aspen and have Daddy write a check to pay for college, yes? Maybe it is, but from my perspective and life experience, no, I don't think so. I don't want to tell anyone they are obligated to write about the downtrodden; I'm willing to believe wealthy people suffer just like the rest of us. There should be more to that suffering, however, than a pitch of woe-is-me-I'm-too-entitled.

What is the Point?: I just finished two pretty terrible anthologies (neither were written by anyone who stops in here, so relax.) Both left me feeling as if I'd squandered two decent reading days and about thirty bucks of my hard-earned $$$ for nothing. They didn't enlighten me, they didn't amuse me, they didn't teach me and they didn't even attempt to entertain me. Mostly they made me feel tired (although one tried to sneer at me, the lip-curls weren't very convincing.) If that was the point, it worked, but it's not going to sell me any more books. Unless my insomnia flares up again.

So what are some of the sins you encounter in the short stories you read? Let us know in comments.
Posted by the author at 12:20 AM