Last week I mentioned the freeware program Smart Edit as a potential helper for writers who want to improve their editing skills. Since I can always use that, I decided to give it a personal test drive and downloaded it with no problems.

Rather than test it on a manuscript I've worked on with a professional editor (which tend to be pretty clean) I thought a better test run would be to use it to scan one of my freebie e-books, which are edited solely by me. I first converted the .docx file for Dark of Heart to text format -- the program accepts .rtf and text files -- and opened it in the program (the manuscript text appears in the center window on the program screen.) I then hit the Scan Now Icon and let it run. 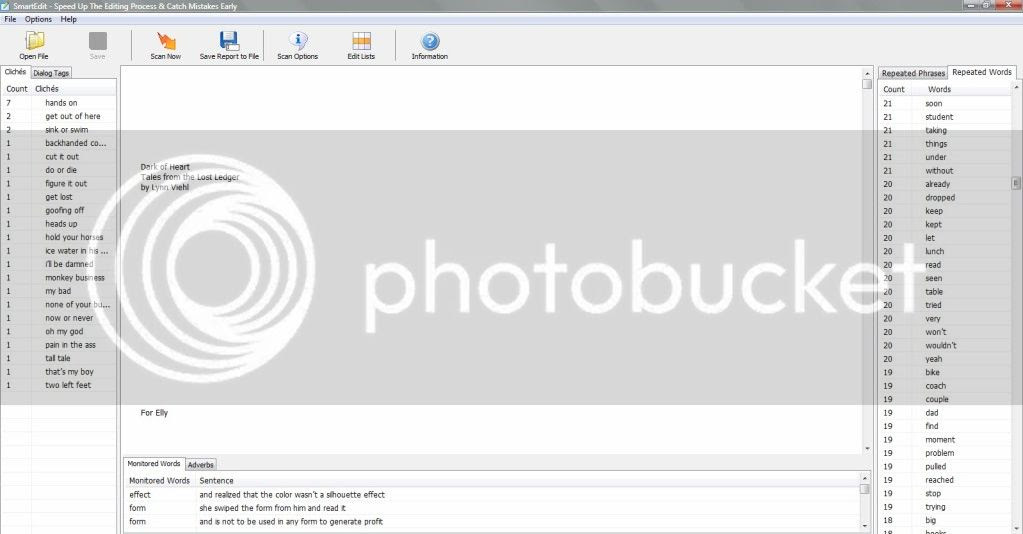 The program finished scanning the novella in about thirty seconds, and gave me several windows of information with different tabs: Cliches and Dialogue Tags in the left window, Repeated Phrases and Repeated Words in the right window, and Monitored Words and Adverbs in the bottom window (to see another, larger screen shot of my file in the program, click here.) Double click on any of the words in any of the lists and the program takes you to the first time you've used it (at which point you can delete the offending phrase and move on to the next instance of use. You do have to delete or change the phrase before you can double-click to move on to the next one.) I also discovered I could save the scan report, open it in Word and print out a copy, which was really handy as the tabbed windows with the info are small and take awhile to scroll.

The scan report came back with 20 different cliches and the number of times I used them in the novella. Apparently I'm very fond of "hands on" as I used that seven times, and "get out of here" showed up twice. The remaining eighteen phrases were only used once, and I know most of them were used in dialogue lines, so I think I did fairly well there (but if I'd had this program while I was editing the novella, I definitely would have weeded out some of those "hands on".)

I thought I also fared well on dialogue tags; I used "said" 118 times, "thought" 51 times, "told" 43 times, "asked" 28 times and "called" 26 times; all of which I think are perfectly acceptable tags (I don't belong to the school of You Must Only Use Said.) What I didn't like seeing were the 27 times I used "nodded", the 13 times I used "added" and the 11 times I used "grinned"; those are not words I like to use as frequent dialogue tags and I would have yanked them out (and I am going to look over the ms. for exactly where I used "nodded" because I don't think I used it specifically as a dialogue tag; it was probably a physical action phrase to replace one, which I'm prone to do when I get tired of said.)

I did so-so on repeated phrases; my biggest offenders were "one of the" (32 times) and "as soon as" (20 times). My single words with the most repeats surprised me; other than the main character's names (which I think should be at the top of the list) I used the word "down" 122 times, "like" 121 times, "didn't" 116 times, "before" 112 times and "could" 103 times. Two of my ongoing problematic weed words, "eyes" and "door" both came in at 37 repeats which was less than I expected but more than I liked seeing.

The one list that didn't bother me much were the adverbs I used; I didn't have that many in the novella and I'm not allergic to any of the others I used. I know there are writers who spit on adverbs and won't let a single one sully their prose; I never got that memo so I think they can be used sparingly. One thing I did want to mention is that the adverb list never printed out on the scan report, so that may be a minor bug in the program.

You can edit the words and phrases lists that the program uses for scans; you click on "Edit Lists" and when the smaller options screen appears you pick the tab for the list you want to edit to remove or add anything you want to that portion of the scan (which you can see in this screenshot.) You can also customize your scans as to what you specifically want to search for by checking or unchecking the boxes in the Scan Options window (which you can see in this screenshot.)

Smart Edit won't ever replace a real live editor, and it won't take the job of editing completely off your hands. But I do think it can be helpful for analysis purposes, not only for finding problem words and phrases you may have missed but also by identifying the ones that we as writers are prone to regularly overuse or misuse.
Posted by the author at 12:00 AM