If you've ever worked in an office and/or been confined to a cubicle, you've probably made at least one paperclip chain, or you've bent those clips into different shapes. I'm guilty, too; I used to make butterflies out of mine.

It seems other people have been bored enough to experiment with paperclips, as lately I've spotted a number of new spins on the old reliable paperholder: 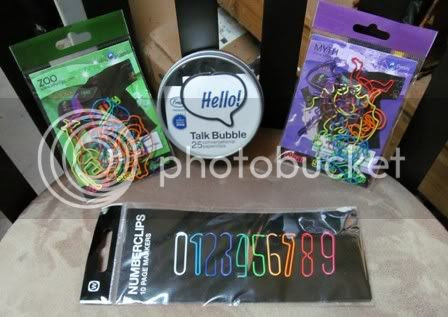 Numberclips are a set of ten page markers that look and function like paperclips but have number shapes from 0 to 9. I found this set at World Market for $5.99.

Silly Clipz are shaped wire clips sold in themed sets of six, and judging from the suggested use on the packaging are being marketed toward kids as clip-on decorations for their clothing and hat brims. I picked up the Zoo and Myth editions for $1.99 each at CVS.

You can get conversational with your paperclips with Talk Bubble, a tin of 25 caption balloon-shaped clips; $6.99 at World Market.

As to how well they work, Yours Truly broke out some from each package and field-tested them: 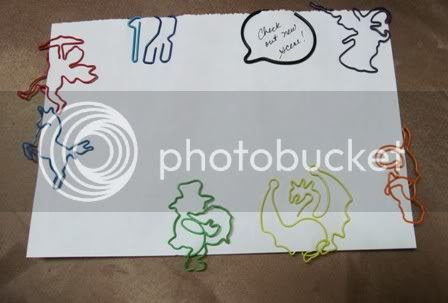 The Numberclips are just like straight-forward, large size paperclips; you do have to remember to put the number-shaped part on the front of your clipped items. If you're working on drafts, scenes, chapters or something else you need to keep in a certain work sequence these might be a painless way to mark the sets.

The Talk Bubble was actually a bit heavy with plastic-coated wire that looks about double the gauge of regular paperclips; probably best for clipping sets of sheets versus one page. When I saw these I thought they'd be great for flagging a specific note you need someone else to read.

The Silly Clipz were the hardest to figure out; the company that makes them included their logo as part of the clip which only adds to the layered confusion of wires; these are of a smaller gauge wire than regular paperclips and will likely bend out of shape pretty easily. I'm also wondering why they're marketing them to children as clothing accessories -- maybe hoping to cash in on the shaped rubber band craze of a few years ago? -- but they don't seem like something I'd give a younger child.

My biggest objection to all three brands is that they're are too pricey for ordinary, everyday use. That said, if you have a special project, don't use a huge amount of clips, recycle ruthlessly or are working on a limited project, the pricetag might be worth it to you.
Posted by the author at 12:00 AM