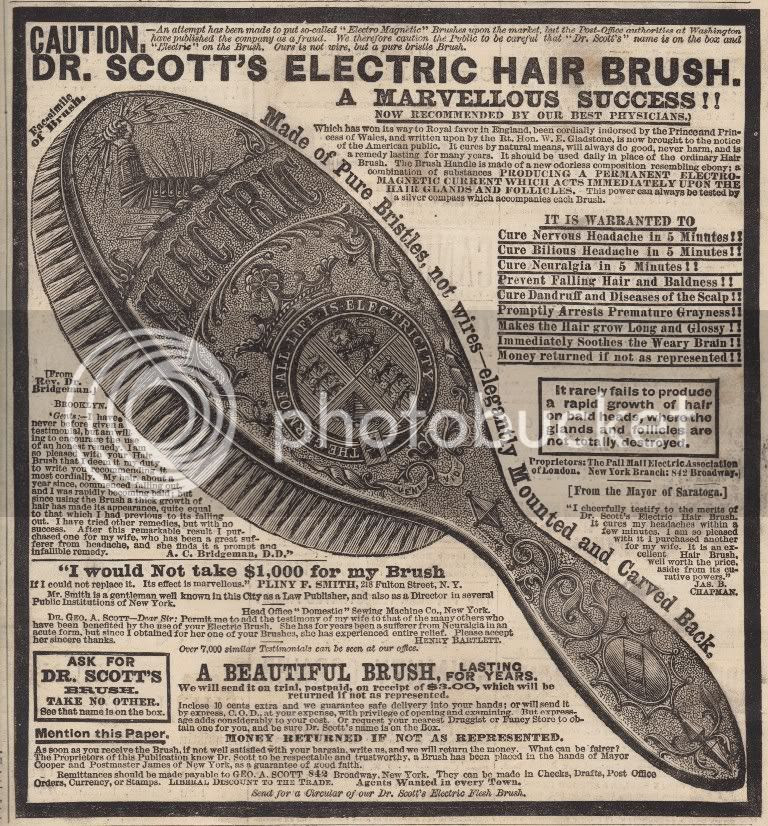 Just what made Dr. Scott's Electric Hair Brush such a Marvellous Success!!? Was it producing a rapid growth of hair on bald heads, or ending nervous/bilious headaches in 5 minutes? Was it curing dandruff and diseases of the scalp, stopping premature grayness, preventing baldness and soothing the weary brain? Or was it the cordial indorsements provided by the Prince and Princess of Wales, the Rt. Hon. W.E. Gladstone, the Mayor of Saratoga, or the effusive Mr. Pliny F. Smith, who would not take $1000.00 for his eBrush if he could not replace it?

The promises in this ad, which in 1881 probably sounded absolutely believable, are rather astounding. After all the germ of all life is electricity -- says so right on the back of the handsome handle (made of a new odorless composition resembling ebony!) A combination of substances producing a permanent electro-magnetic current which acted immediately upon the hair glands and follicles sounds so important and scientific, doesn't it? And look, actual royalty indorsed it! Had to be the real deal.

I'll tell you the secret that made Dr. Scott's eBrush such a success. It was the $3.00 sent in by every hopeful bald, graying, headache-prone and dandruff-ridden person who read this ad and believed it. And when they got their brush and it didn't produce anything but a little static electricity, which is really all it was capable of producing, they still felt the tingle. That little buzz was likely just enough to keep them hurrying to the mirror every morning expecting to see a head full of long, glossy hair.

We all want something, and every now and then some eBrush-type salesman will come along and tell us how we can get it. It will be cheap, easy, and there will be plenty of VIP indorsements assuring us of how amazing it is and how beautifully it works. They make it sound so wonderful because they're compensated to do that, just as this newspaper was paid to run this ad. Trust me, if we're not the ones forking on the three bucks for this secret to Marvellous Success!!, someone else is.

I can guarantee you, the only person Dr. Scott's electric brush really worked marvels for was Dr. Scott. Same goes for every other quack out there selling similar eBrushes.

In a hundred and thirty years, someone will look back at a page from our time, and chuckle over whatever is our version of Dr. Scott's eBrush. They'll talk about how silly we were for believing in such an obvious fraud. And then some of them will slap down their hard-earned credits for something that preys on their hopes, and feeds on their dreams. Because just as if anything sounds too good to be true it usually is, there will always be people just desperate or hopeful enough to believe it's true anyway.

Keep your eyes open, your brains working and check the facts thoroughly before you buy into anything anyone tells you. And please don't base your decisions on what the Dr. Scotts out there are telling you; judge things for yourself.