I've been playing Scrabble® since they tried to teach me how to spell in elementary school, and after chess it's my favorite board game. It's an excellent way to spend an unplugged evening with the kids. We regularly have Scrabble® nights here at Casa PBW, and (when I can get a couple of teams together) the occasional Scrabble home tournament. Last weekend Mom and I paired up and kicked everyone's butt all over the board.

I also have an electronic version of the game that allows me to play against the computer. A game takes about ten minutes to play by computer so it's the perfect mini-break past time. I usually win about half the games I play up to the expert level, at which point I always lose, but I do try to be graceful about it. Plus one of these days I am going to beat it; I just have to figure out how to make a word out of Q, J, K, X and three Is (I swear, the expert mode always sticks me with the worst letters.)

A Scrabble® game can be used for other things, too. Tonight while I was playing against the computer these were the first three words that landed on the board: 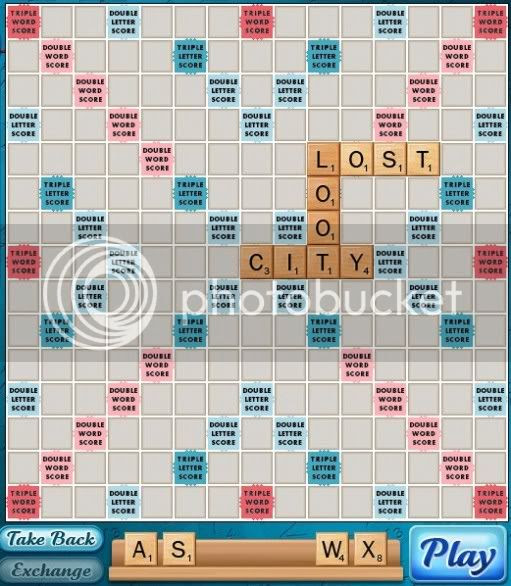 I arranged the words in my head -- Lost City Loot/Loot Lost City/City Lost Loot -- and realized I had three different basic premises for a story: Someone finds treasure from a lost city; a lost city is discovered (and looted); a city loses its treasure. While I probably won't get story ideas from every game I play, from now on I think I'm going to be paying more attention to what lands on the board.

At the moment I'm putting together a trilogy proposal, and I needed six names for the protagonists. My usual methods weren't producing much, so on a whim I took out my hands-on Scrabble® board (Diamond edition, naturally) and started playing with the tiles. I had the first four names I needed in a couple of minutes, and after switching out tiles for a while I hit on the last two. I even got a bonus in the process; the name of the character who brings the final two protagonists together. 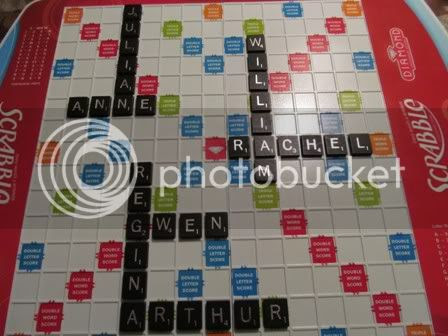 Although the limited number of letter tiles can seem restrictive, I find it's actually a good thing. I think in some cases too many choices can be overwhelming. I had to do some creative thinking while I was working with the letters versus using as many as I wanted, and that helped me focus on what was important. If you want more letters, you can make your own from squares of cardboard, or pick up an extra game from a thrift store just for the tiles.

Other ways you can use a Scrabble® board:

Set up keywords and rearrange them to find new ideas for titles, settings and other named story elements.

Work with the tiles to coin words for world-building purposes.

Sort out the names in your story by first letter and eliminate sound-alike given names (this prevents your cast from sounding like a new branch of the Duggar family.)

Have you ever used a Scrabble® board to work out something with writing? Are there any other ways you can think of using one to help? Let us know in comments.
Posted by the author at 12:45 AM