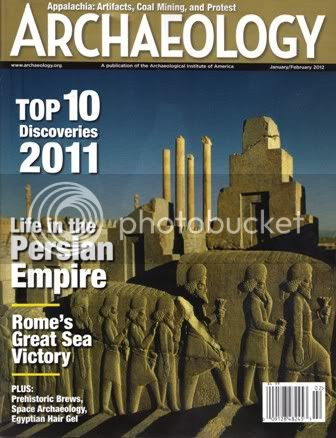 The January/February issue of Archaeology magazine features among other way cool stuff the top 10 archaeological discoveries of 2011. These include:

There are articles about researchers finding evidence off the coast of Sicily of why Rome won the war at sea it waged with Carthage (bronze battering rams fitted to the prows of their ships); interesting theories about what fulachtaí fia, mysterious burnt mounds in Ireland, were used for; and the rush by scholars at the University of Chicago to create digital images of tens of thousands of clay tablets unearthed in Iran in 1930 before some ongoing and very complicated legal battles result in the sale of the tablets or their return to the Iranian government.

All of these real-life discoveries, theories and issues make terrific reading, but they also provide innumerable opportunities for storytellers. Reading about such marvelous finds always invokes a sense of wonder in me. Who is that Viking, and why is he buried in Scotland? How did a female end up ruling a male-dominated culture? What subjects did they teach at gladiator school? Were they really eating Ramen noodles as far back as 2,400 years ago?

Archaeological discoveries are always a goldmine for the historical fiction writer, but they offer a lot for a modern-day story as well. Imagine a university intern rushing to scan those embattled ancient Persian tablets, and in the process he accidentally drops one. It breaks open and . . . what happens next? Does he find something concealed inside the clay? Does it release some kind of ancient Persian demon? What if just arranging the tablets in a certain pattern can open a doorway to another time, another world, another reality? Maybe the legal disputes over the tablets is a ruse, or a way to disguise the real battle (and if you're a political thriller writer, I'm sure you can run with that all the way to Tehran.)

Antiquity attracts me as a storyteller not just for the evidence of it that archaeologists discover, but for all the details we'll likely never know. Ireland's burnt mounds, which date back to the Bronze Age, may have been used for cooking, bathing, brewing alcohol or dyeing textiles -- some activity that involved heat intense enough to crack stone. Since there is no general consensus among the scholars, the purpose of the mounds is up for grabs (from the way they're described, they sound to me like some kind of ancient kilns.)

Even small details from real life discoveries can enrich your fiction. On page 14 of this issue is a little sidebar with an image of a gold and sapphire medieval ring and a brief explanation of why sapphires in the medieval period were primarily worn by royalty, nobility and important members of the clergy. Wearing sapphires was (and still is) supposed to bring clear thinking, enlightenment and good luck. One of my characters from the new Darkyn trilogy definitely needs all three, so now by reading this I've learned something I can use in that book.

I love this magazine, but there are also plenty of resources on the web where you can go virtually digging for story for free:

UK's Antiquity offers some free articles from their archives to read on their web site (scroll down to the bottom left for the editor's choice.)

Exploring Ancient World Cultures takes you on a virtual reading trip around the world by way of the distant past.

Run searches on specific eras and topics you're interesting in researching, and you'll find sites like Friends of the Hunley, a group dedicated to educating people about the recovery, conservation, and exhibition of a Civil War-era combat submarine.

LiveScience -- at the moment the history section is running an interesting piece here on a strange ancient Roman "winged" stone stucture found in England.

Why do civilizations collapse, anyway? Here's an interactive web site set up by Annenberg Learner to answer your questions.
Posted by the author at 12:00 AM