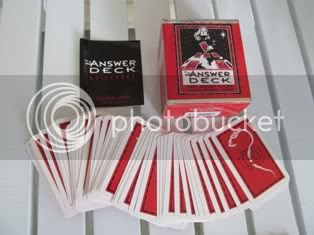 You never know what gems you'll find in your book store's discounted stock sections. At my local BAM they always have a pretty decent selection of mini boxed kits, usually discounted up to 75%. Rummage through these and you might find anything from Paris in a box to a little Zen garden for your desk.

I like to play with cards, so whenever I see a card deck of any kind it grabs my attention. Since I also have lots of questions, I definitely couldn't resist The Answer Deck, created and designed by Nicholas Zann.

The Answer Deck is a kind of alternative Tarot, with 73 illustrated divination cards that use concept words like Abundance, Challenge, Greed, Power, Truth, etc. Mixed among these are random characters (The Master, Dark Haired Woman, Friend, Hidden Enemy) and a few nouns (Battle, Journey, The Lesson.) The cards are all beautifully illustrated with graphic black and white images representing the corresponding words. According to the mini instruction booklet you ask a question, draw cards from the deck, arrange them on the included paper mat, and then interpret an answer* based on the layout and how they relate to each other (also briefly explained in the booklet.)

I paperclipped my mat to a piece of cardboard to keep it flat before I dealt a few layouts and ran some questions by it, and the answers were certainly entertaining. I'm either going to take over the world, become rich beyond my wildest dreams, or finally find the egg slicer my guy put away and subsequently forgot where he put it. If the fates are listening, I'd really like the egg slicer back now ((and click on any of the following images to view a larger version): 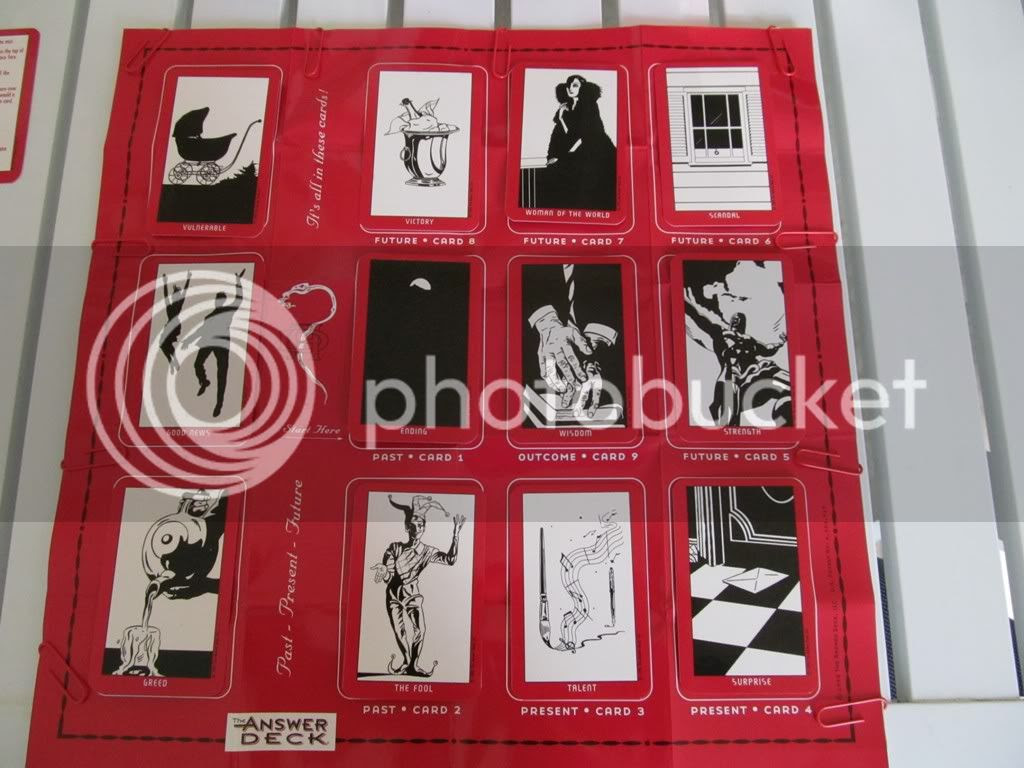 The really interesting thing about these cards for me was how well they might work as creative prompts. Simply shuffle the deck, deal out a couple of cards, and see what ideas they spark, which you can jot down like this:

Woman of the World - Scandal

Immediate thoughts: Talent and wisdom rarely go hand-in-hand. One is random, the other has to be earned (usually the hard way.) I also recalled something from a baseball documentary about a very talented player who still had to be actively discouraged from chasing after firetrucks.

Add more cards to what you deal out, and you can see story patterns beginning to emerge:

Immediate thoughts: What we believe can change in an instant. One is never so adamantly confirmed in their beliefs as the moment just before they're ripped apart. Like believing you're done with love, and your life is so much better lived alone, and then that fair-haired guy with the amazing voice and gorgeous green eyes smiles at you . . . . well, we'll save the rest of that for the autobiography. You get the general idea.

I had such a blast playing with these cards that I went back and bought three more decks for a giveaway. If you'd like a chance to win one, in comments to this post tell us about an unconventional source of inspiration you've tried (or if you can't think of one, just toss your name in the hat) by midnight EST on Saturday, January 28, 2012. I'll choose three names at random from everyone who participates and send the winners The Answer Deck and a signed copy of my Kyndred novel Nightshine. This giveaway is open to anyone on the planet, even if you've won something here at PBW in the past.

*Please note that as with most mass-produced divination tools The Answer Deck is intended for entertainment purposes only.
Posted by the author at 12:00 AM