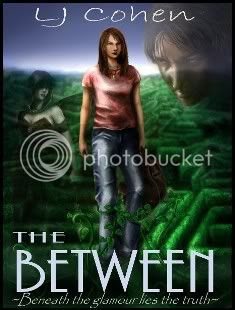 There are few events more exciting for a writer than the official release day of your first book, and that day has arrived for our blogpal L.J. Cohen with the debut of her YA novel The Between.

Here's how the story starts: at school, no one notices Lydia Hawthorne except Clive Barrow, a gorgeous new boy who is fawned over by everyone but her. Even more puzzling, Clive won't leave Lydia alone; he follows her everywhere -- and he always seems to know exactly where she'll be at any given moment.

Lydia does her best to dodge Clive, but he shows up on her bus on Friday afternoon to make some weird references to the characters from Shakespeare's A Midsummer Nights' Dream. Only this isn't a classroom exercise; Clive speaks of Oberon as if he were a real, living King. As cute as he is, it's obvious to Lydia that Clive is more than a little weird; he might be serious trouble.

Just as Lydia has had enough of his creepy stalker craziness, a lightning storm and an enormous dark force envelope the bus, and Clive drags her from her world through a window of rainbows into a place he calls Between. There he tells Lydia that she is a changeling, a trueborn Fae whom Oberon, King of the Bright court, exchanged with a dying mortal infant. The magic protecting her has been gradually wearing thin, and now that it's about to collapse, she has to walk away from her mortal life and return to the Fae. Worse, the King wants Lydia back for his own reasons -- and apparently so does his nemesis, Queen Tatiana of the Shadow court.

In a sense L.J. Cohen is the reader's Clive; without warning she steals us away from the real world and transports us to the beautiful and dangerous realms of the Fae. Like Lydia, we're quickly caught up in the labyrinthine personalities and politics of the Faerie courts, where nothing is what it seems. As the story unfolds, we see past the surface spectacle to the explosive secrets lurking beneath, and along with Lydia uncover each one to determine if the wrongs of the past can be set to rights -- or if the world of the Fae is doomed to war, destruction and extinction.

I've always been very selective about the fantasy I read because I generally don't care for magic books. Too often fictional magic systems are illogical, implausible, and regularly employed without any consequences at all. In bad magic books the spells are piled on in every scene, the same way makeup is trowelled on by certain women who believe it fools everyone into thinking they're younger and more attractive when it's simply sad and clownish.

This isn't the case with The Between. L.J. Cohen's classic-based magic system suits the world-building and the characters, makes sense and doesn't smother the story with a lot of unnecessary spell gunk. I think L.J.'s skill with using the magic elements (as well as handling the Shakespearean world-building) comes from her poet side. I kept seeing that lyrical influence throughout the story, too; from the rhythms of the dialogue and the action to the descriptive passages.

Also, this is a YA novel, and I'm fairly conservative about what I consider age- and subject matter-appropriate fiction for teenagers. After reading L.J.'s book I'd feel comfortable handing it out to teens of any age. Parents of kids twelve and under might want to prescreen the novel as there are a few scenes with some moderately nightmarish and violent content that I thought might be frightening to kids who are especially sensitive.

I really appreciate the many formats the author chose to use for publication. Via Smashwords I was able to purchase a .pdf copy, download it and print it out, and then I discovered I could get print copies from Amazon.com as well. I don't own an e-reader, and due to vision problems I can't read for long periods of time from a computer screen. For those reasons when an author goes strictly electronic and doesn't enable a printing option I don't buy their book. No print version makes it difficult for me to have giveaways, too. I have given away e-books in the past, but with some e-publishers this can get pretty convoluted so print is just more convenient. L.J. gave me all the options I wanted at mulptiple retailers, and it made me wish every indie author would do such a great job with distribution.

I thoroughly enjoyed reading this novel, and I think you will, too -- but as always, you don't have to take my word for it. In comments to this post, name your favorite magical novel world or author (or if you can't think of one, just toss your name in the hat) by midnight EST on Monday, January 16, 2012. I'll choose five names at random from everyone who participates, and send the winners a trade paperback copy of The Between by L.J. Cohen. This giveaway is open to everyone on the planet, even if you've won something here at PBW in the past.
Posted by the author at 12:00 AM