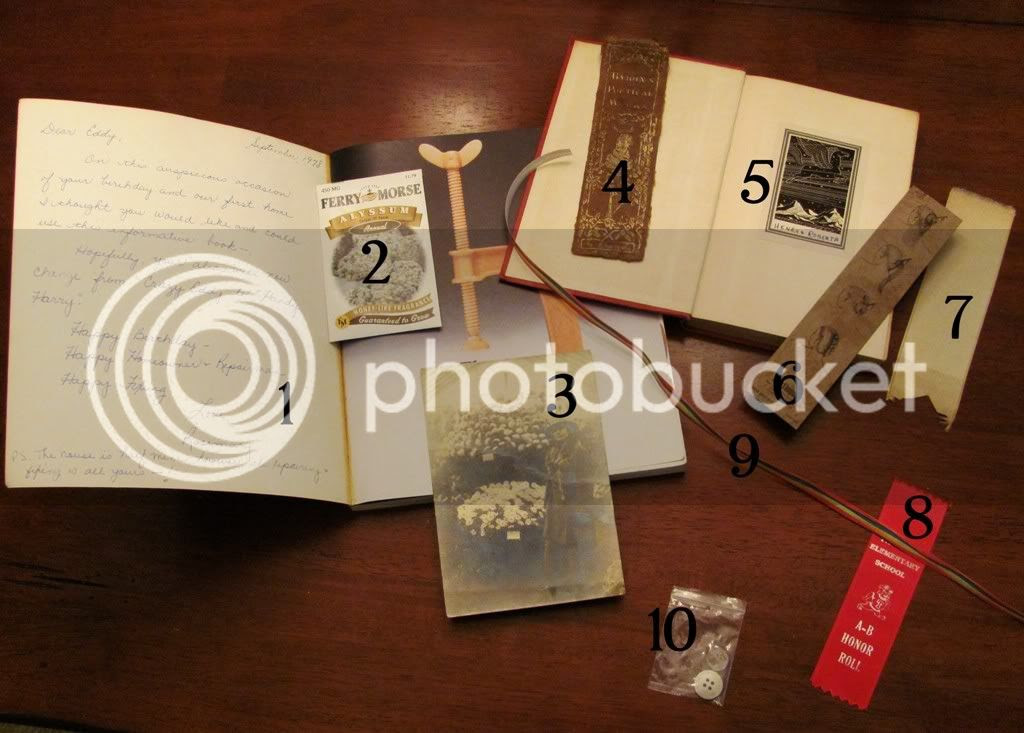 1. Love Letter: back in 1978 a new wife gave a handyman book to her husband after they bought their first home, and wrote a funny, beautiful note to him on the inside of the front cover. Thirty years later I bought the same book from a UBS for my guy, and didn't discover the letter until I got home.

2. Seed Packet: This fell out of a newer landscaping book I bought at a flea market. It was never opened so the seeds are still inside. I should plant them somewhere. 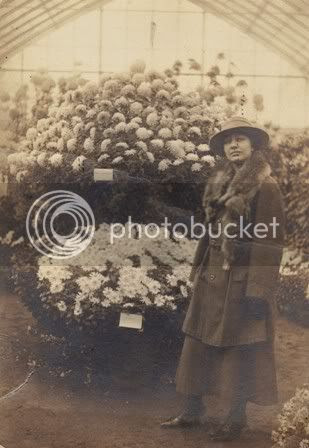 3. Old Photo: in 1917 a lady named Eloise Barto visited the Lackawanna Botanical Gardens in New York and had her picture taken by some flowers. How do I know this? Someone took a photo of her and wrote her name, the date and the location on the back of it, and ninety years later I found the photo tucked into a collection of Spenser's poetry. Btw, Eloise's eyes and expression were what first inspired my character Jessa in Shadowlight.

4. Book Spine: The actual spine cover of a nineteenth century edition of Byron's complete works, found inside the same book (I think the bookseller probably tucked it inside so it wouldn't be lost.)

5. Bookplates: Many of the older books I buy come with bookplates, as that was the custom in the old days, but this one was particularly charming, as it features a Pegasus flying through a starry night sky and the names Henry & Roberta inscribed on it. Found in a 1956 edition of Helen Ashton's The Half-Crown House. One of these days I have to use those names in a story.

6. Hair Pick Directions: Someone used as a bookmark the cardboard insert for a hairpick, which has illustrations on how to use it. I found it in a used copy of Kahlil Gibran's collected works.

7. Silk Ribbon: This cream-colored, completely unmarked ribbon had darkened at the bottom from where it protruded from the old King James Bible where it was left and that I bought about fifty years later from a church rummage sale.

8. A-B Honor Roll Award: A red ribbon from a nearby elementary school left in a romance novel. I always feel bad about having this one, as the mom probably meant to keep it, but there were no clues as to who the book belonged to before I bought it from a UBS.

9. Multi-colored paper ribbon: This looks like a remnant from some gift-wrapping ribbon. I found it literally wound around a section of a pocket thesaurus.

10. Button Bag: a small plastic zip-lock bag with two buttons in it; the kind that is sold attached to a nice blouse as spares. Found tucked in the center of a newer hardcover I bought from a library sale.
Posted by the author at 12:00 AM