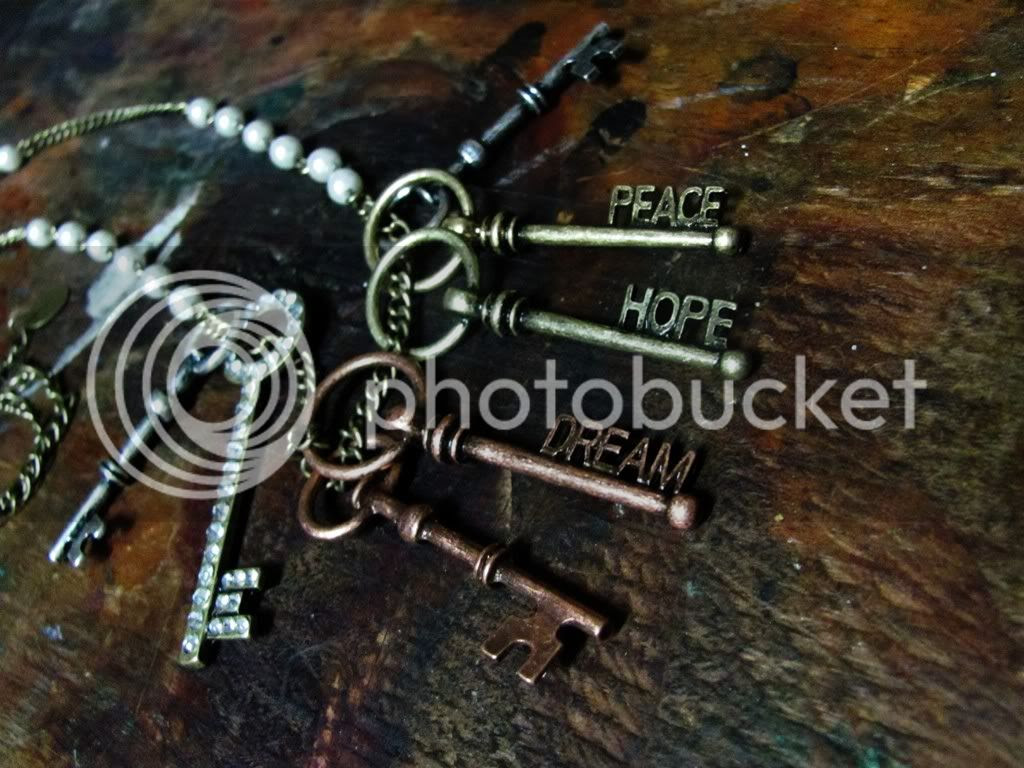 While I was out last week taking care of school shopping, my kid diverted me into Claire's so she could get a new keychain. I wandered around marveling at all the stuff I am now too old to wear when I found a selection of antique-look necklaces sporting decorative skeleton keys. I saw one I really liked, grabbed it on impulse and went to hurry the kid along so we could move on to the shoe store.

It wasn't until I got home and took out the necklace again that I saw there were words welded to some of the keys on the necklace; mine had keys that read Peace, Hope and Dream. As those are definitely three of my favorite words, it was a neat surprise (and after checking Claire's web site, I found this listing for it. They call it the Inspiration Keys necklace; excellent name.)

Discovering these -- pardon the pun -- keywords on my necklace also made me think of another way to work on one character I've been tinkering on for my next novel. I know almost too much about him, and I've been getting mired down in all the details and backstory, so I've been wanting to distill all this info and somehow summarize it to get a better handle on who he is. Taking a cue from my new necklace, I thought about how I would describe him using just three words; words that are keys to who he is.

The first would be chimerical because of the complicated aspects of his character, the manner in which he's evolved as a person, and (depending on how you look at him) his life has been a chimera of dreams and nightmares. Resolute is also a central aspect to his character, as his determination is both unwavering and defining, and drives him so much in the story. The final keyword for him would be valorous. He is the embodiment of this word, not just in how he conducts himself, but in that he constantly inspires the same in others.

All right, now it's your turn. What three keywords would you use to describe a character from one of your stories (or, if you're a reader, from a book you love?) Let us know in comments.
Posted by the author at 12:00 AM