I promised I'd let you all know the fate of the StarDoc series, as Crystal Healer, book nine, finished my current contract. I now know what will happen to book ten.

But before I get into that, I'd like to look back at the first nine books, which span the entire length of my pro career: 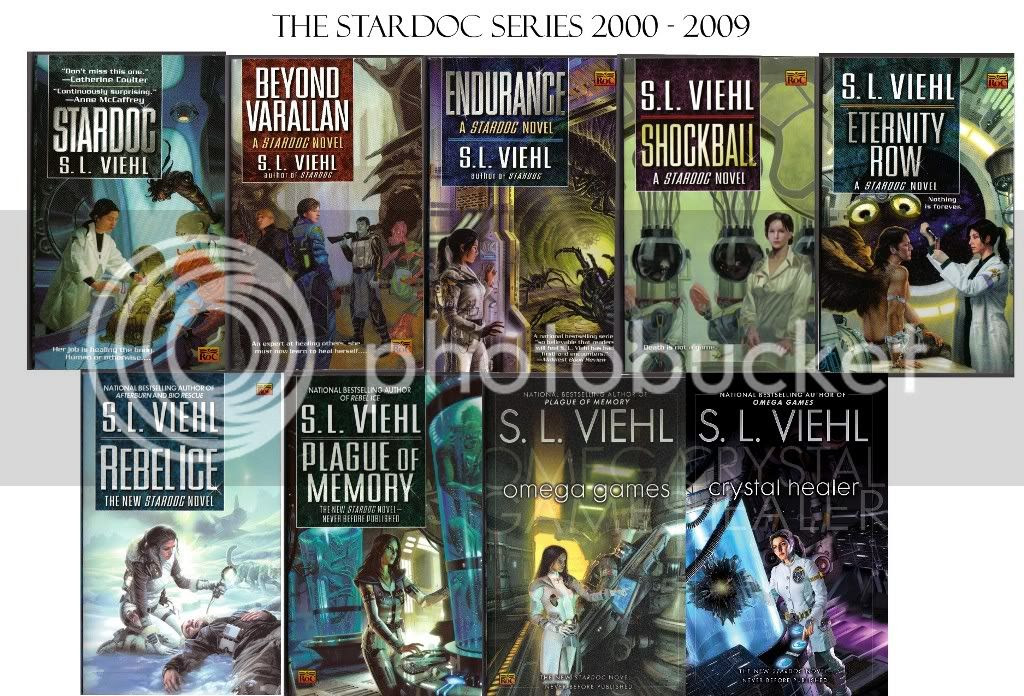 This saga began with my first published novel, StarDoc. A science fiction series with miniscule print runs, no publisher support and a completely unknown author faces overwhelming odds, and yet somehow it became a genre bestseller from book one. That sounds great, but what it translates to is that all of the first five books earned out and made a modest profit, but never strayed beyond the midlist.

Midlist wasn't good enough. The publisher decided without telling me that they would shut down the series after book five. I wasn't finished, however, and the readers also refused to accept it. They wrote letters and e-mails, and otherwise made trouble. It didn't make a difference to the publisher, but it did to me. My readers didn't give up on me, and I couldn't give up on them.

They spread the word, kept me writing StarDoc stories for them and believing we could bring back the print books someday. It was a hopeless battle, of course. For the next four years, using word of mouth alone, my readership kept the series alive. Although no new StarDoc books were published from 2002-2006, my readers kept the faith, passed along my free stories, pestered their friends to read the books, expanded my readership, and gradually built up my sales numbers for the first five books, enough to keep them in print. In time they built them up enough to prompt the publisher to offer me a new contract for two new books, and then two more.

So what is the publisher going to do about book ten? You all know how my luck goes -- mostly from bad to worse. SF as a genre has never sold well, and with the way the industry is right now, the midlist doesn't sell enough to make it worth most publishers' time and money. And selling the tenth book of a SF series . . .

Well, as it turns out, not all my luck is bad.

Sold yesterday: StarDoc book ten, title and publication date to be revealed (hopefully) in the near future, to Roc SF/F.

I've been so quietly stressed out about this book that I'm kinda in shock. I'm not sure what it means, other than I can finally finish the series, and my loyal readers get to see the last book in print.

I'm kidding. After all these years, and so much disappointment, and so many hopeless battles, I do know what it means. It means two words. Two words I've waited seven years to say about this ordeal. Two words that as a midlist science fiction author I was never supposed to say. Two words that I'd really like to tattoo on a few jackasses, but I'll settle for just writing them here: