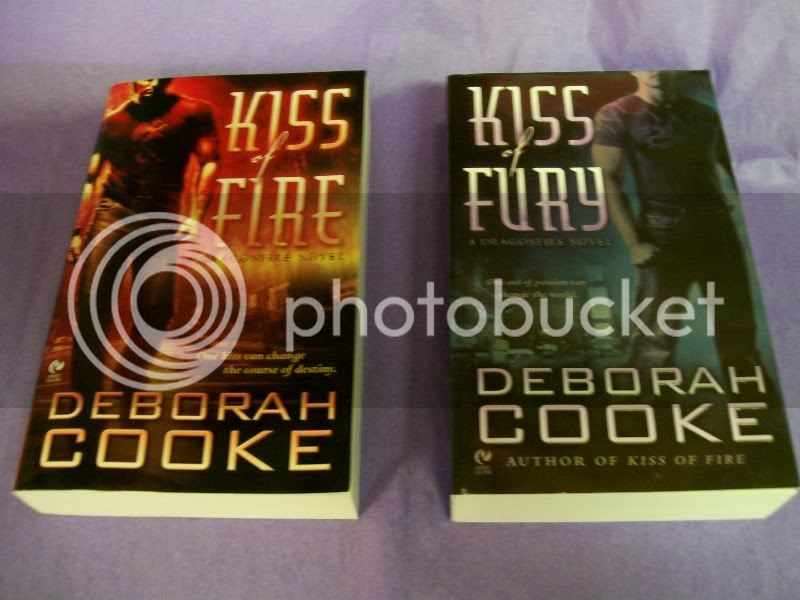 In between monster writing & editing sessions, I'm reading Kiss of Fire, the first novel in Deborah Cooke's Dragonfire series (I went and bought the first two in the series, as promised) and feeling very glad I did. As I suspected, the first novel in the series sets up the author's world-building for me in increments so I can get up to speed on a very complex paranormal/alternative/secret society. This will help me as I read on toward book three, which was the book I picked up first and then set aside.

So far I like the characters in book one. Although they fit the typical hero/heroine paranormal romance template (he's a protective alpha male with the soul of a beta, and she's every clueless gal born with a secret power she has yet to discover/manifest) I still like them. The writing is lovely, the storyline is solid and it all works. Even the well-covered destined-to-mate aspect of the plot isn't putting my hackles in raise mode. If I carry your book in my purse when I go to pick up the kids from school so I can read a couple pages while waiting in line, trust me, it works.

What I like in a read is not always what gets my personal stamp of writer approval. For example, if a guy comes into my bookshop and turns into a dragon, one of my characters would not take it in stride. My characters are probably going to freak out. There will be screaming, and running and, if possible, a shrieking 911 call. Sara, the protagonist in Cooke's first novel, does none of my character type things. She sits down hard on the floor. While dragon guy shifts back into human form and tries to enlighten her as to her role in his life as his destined baby incubator, she still doesn't freak. She thinks a little about dipping him in chocolate, but ultimately doesn't believe him and (nicely) kicks him out of the store.

It's not what I would write. The dragon guy would be in some serious trouble in one of my stories. He wouldn't get a chance to casually chat about destiny and mating; he'd probably be busy removing some sharp pointy objects sticking out of his hide. He'd likely have to grab my girl and fly off to some hidden crystal cavern where he could keep an eye on her while she works through her rage, fear, denial, etc. She'd try to kill him and/or escape, they'd tussle, things would progress from there. Love isn't a polite dance to me; as Pat Benetar advised, it's a battlefield.

I'm also wondering just how you fit a dragon in a bookstore. The logistics of it. How passing pedestrians would react to seeing through the front window this dragon guy in his scaly form. The books catching on fire when he exhales. Smoke alarms going off. The fire department arriving. That sort of thing. I'm all about the reality and the chaos.

These are very pretty dragons, too. Jewel-like scales, gorgeous eyes, in colors that have a lot of semi-precious stone references: topaz, malachite, garnet, etc. It's a trick many romance writers do to make a traditionally unattractive creature more appealing to the female reader; kind of like toy manufacturers turning big, smelly, sweaty horses into My Little Rainbow Ponies. I'm not really a fan of that either; I like the creatures to be creatures, warts and all.

So how can a writer like me enjoy a book by a writer who doesn't write like me, has a different approach to characters and makes very different story choices? While I may think about how I would have written the story I'm reading, I try not to take the judgmental approach. Every book does not have to be written according to some list of rules and procedures in my head. As a reader I want to be more like a sponge -- simply soak it all up and let it engulf me. Then, when I'm fully immersed in the other writer's story, I judge my feelings, not the other writer. Did I enjoy the entire experience (even if it wasn't what I would have done?) If yes, I'll buy more of that author. If it was fair to middling, I'll probably try the author again. If I didn't enjoy it at all I'll probably pass on the author (exception: if it's a new author I may give them some time in the biz before trying them again. I try never to judge an author by the first five novels.)

If I've not become immersed, it's always because something kept me out of the story. Less than professional writing is #1 on that list; derivative writing is #2. If you're not writing at a professional level, you won't immerse me, and I guess that's just an occupational hazard. If you've cloned something I've already read by another author, ditto.

If I've been burned too many times by other authors in that genre, I think that factors in as well. I've mentioned that I am not a fan of dragon books; for years I've avoided them like writer conferences. I think it came from a combination of first having read the best dragon books ever published and then plowing through all the subsequent dreck trying to find more gems. Eventually I just got tired of the mediocrity and quit buying them. It's been at least four or five years now since I read a dragon book, so I've had time to get over my unhappy reading experiences. Reading Deborah Cooke made me realize that; I'm not sneering every time a dragon pops up in the story. 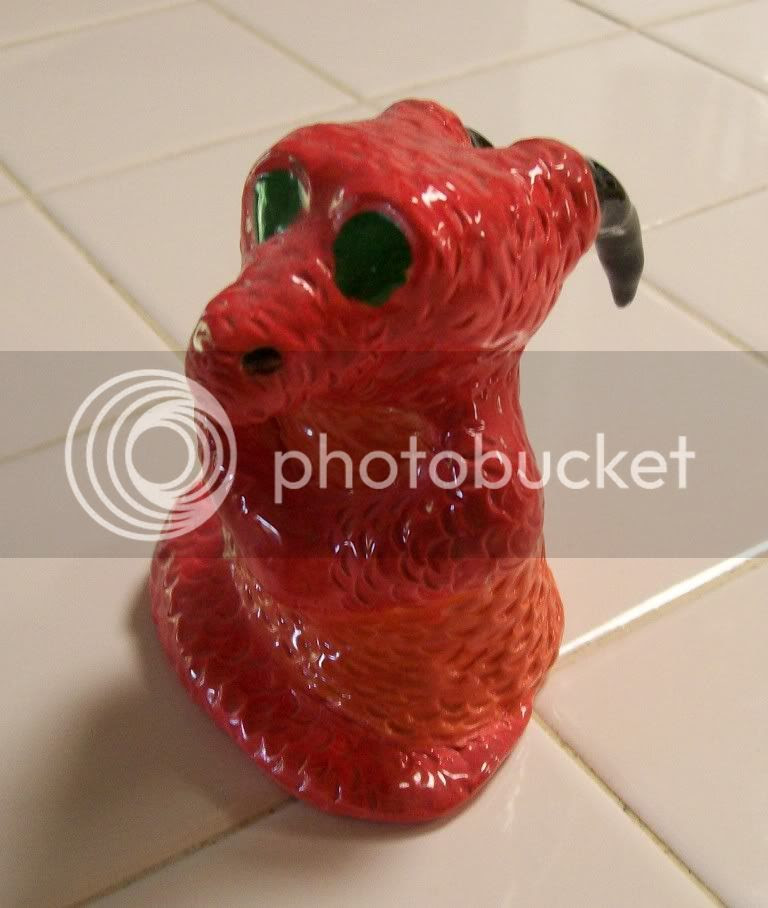 This will be helpful in years to come for another reason -- my daughter is crazy about dragons, loves to read and write dragon stories, and even draws and sculpts dragons (here's one of the dragon figurines that she made freehand in Art class last year.) Sometimes I wonder if she gravitated toward them because of my dislike -- the classic teenage response -- but it's now become her thing. I don't have to like everything my kids like, but I like to stay involved. Kat has already worked her way through all of my dragon book keepers, now maybe I can find some new works that she'll enjoy without giving myself a migraine in the process.
Posted by the author at 12:00 AM