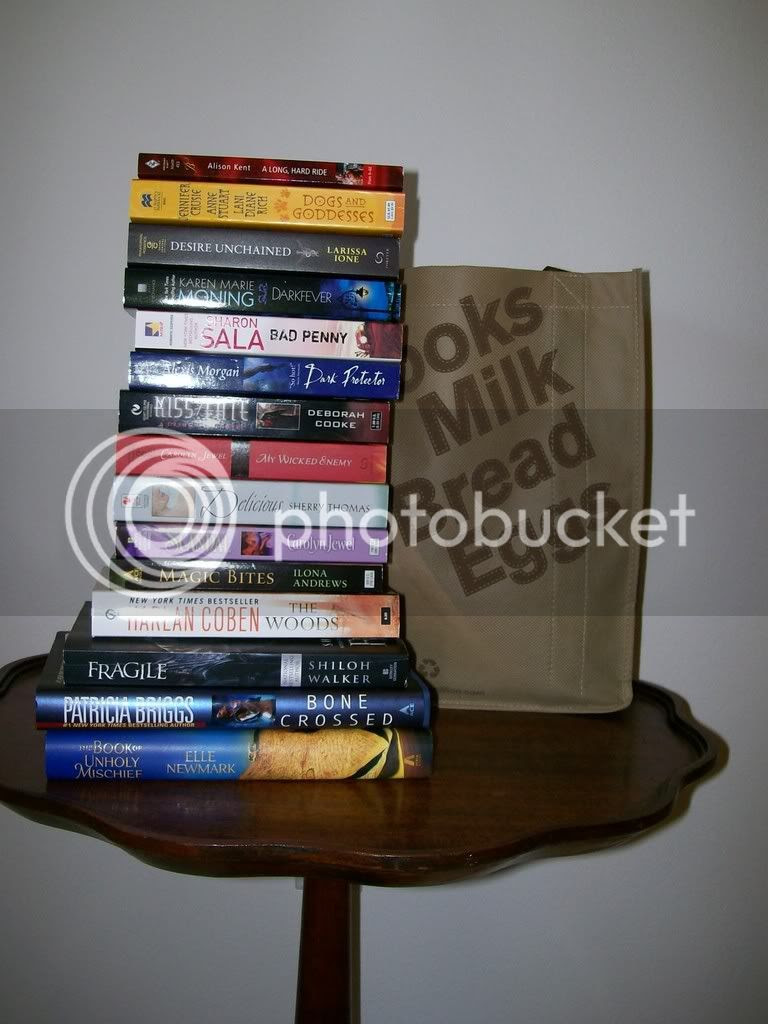 After receiving all the great recs you guys made about how to spend my money at the bookstore, I printed out the list of comments and took a long look at them.

First I crossed out the titles that I'd already read (seven), that I already had on order with B&N.com (five), or authors who for whatever reason I will not read or no longer read (Who Shall Remain Nameless.) Once that was done, I took the rest of the list with me to BAM and started hunting them down on the shelves.

I spent an hour at BAM and then went over to Borders (which has a slightly better romance section.) Basically I browsed around and looked at the different titles, and if I wasn't sure I read a few pages. Some appealed to me instantly; others just weren't my cup of tea. Some I bought on impulse. A lot of the books on the list simply weren't in the store.

Between the two stores I picked up fifteen books, three of which I had planned to buy before I asked you all for recs (these I marked below with a *). The rest I bought for a bunch of different reasons, starting with the fact they were actually in the bookstore (can't buy what isn't there.)

What I hauled home, and why:

Magic Bites by Ilona Andrews -- Di, Shiloh and Booklover all mentioned the author, and someone who gets that many recs should be test-driven.

Bone Crossed by Patricia Briggs -- I didn't know the new Mercy book was out, that's how oblivious I've been. I also thought I had this pre-ordered, but if I did I can always pass along the extra copy.

The Woods by Harlan Coban -- I haven't read anything by him in a while; I haven't been in much of a mystery or crime fiction mood, either. I'm sure Harlan will shake me out of it.

Kiss of Fate by Deborah Cooke -- I almost passed on this because it has dragons in it, and I'm not what you'd call a (cough) dragon lover. But I'm trying to be more adventurous, and evidently the dragons are shape shifters, so maybe they'll stay in other-than-dragon form. I can always hope, right?

Dogs and Goddesses by Jennifer Crusie & Pals* -- I did plan to buy this one anyway later on this month when the moon is waxing and I have a priest bless the house. Okay, if all of you could purchase Stay the Night with that radioactive pink cover, I can chance some bad luck and buy one adorned in evil yellow. But I'm putting a book cover around it tonight. Just to be safe.

Desire Unchained by Larissa Ione* -- Had planned to buy this in March but it's out early. Or I had the wrong release date written down. Or they ignored the author's laydown date. My head hurts.

My Wicked Enemy and Scandal by Carolyn Jewel -- Honestly I'm not sure how I ended up with two Carolyn Jewels; I only meant to buy one. Maybe Scandal jumped in my tote when I wasn't looking.

A Long, Hard Ride by Alison Kent* -- Another planned buy; and I bought all the copies they had at BAM because I know I'll need extras.

Darkfever by Karen Marie Moning -- I picked up this one because I liked the cover. Hey, sometimes I just like the cover. Amie's glowing rec also helped.

Dark Protector by Alexis Morgan -- I like books that have a doctor character in them. Also very well-written cover copy on this one.

The Book of Unholy Mischief by Elle Newmark -- Could NOT resist a book with that title, and PK's rec appealed to my inner "need something different" Bookeemonster.

Bad Penny by Sharon Sala -- I've seen her books but I don't think I've ever read her work, and she's been around for a while, so when Sasha recc'd her I thought it's time I give her a try.

Delicious by Sherry Thomas -- I almost didn't pick up this one because it's a historical romance, which I stopped reading some years ago after reading too many poorly-written knock-offs. It's been so long now I don't know who's writing what, so I'm hopeful this one will be different.

Fragile by Shiloh Walker -- Nice cover art, very decent premise, why not? (Don't tell her, but I buy all of Shiloh's books.)

I plan to read at least one book a day for the next two weeks or however long it takes me to demolish the stack, and then I'll report back to you on how it went. Thanks to everyone who helped me spend my money.