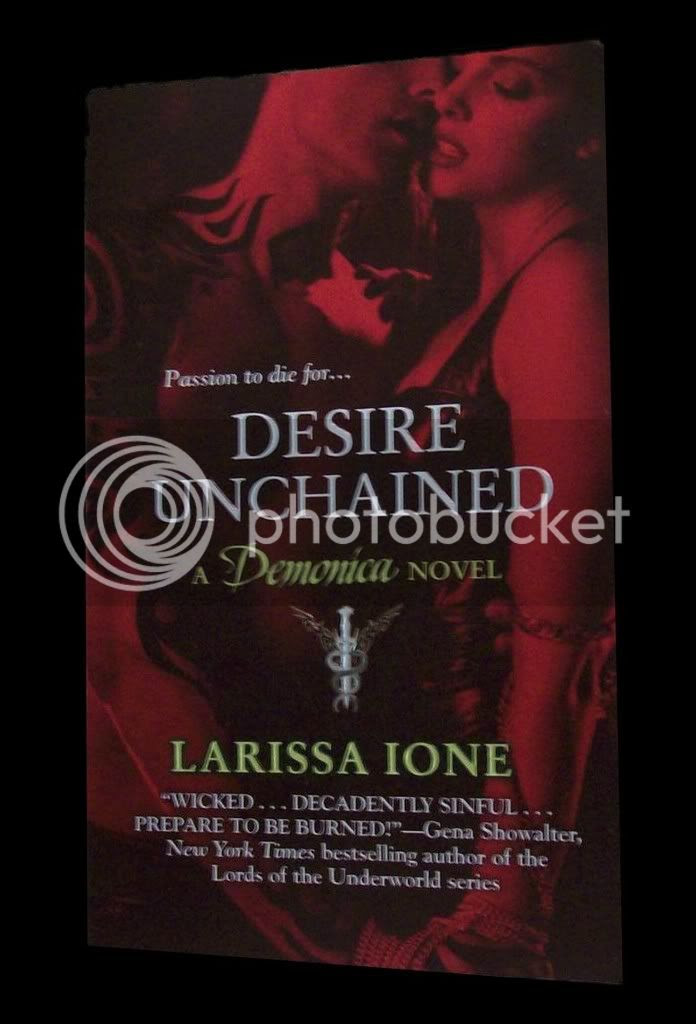 Desire Unchained is the second installment in author Larissa Ione's Demonica series, and although it's been six months since I read the first novel, Pleasure Unbound, I had no trouble remembering the characters, the series premise, or picking up the storyline.

Desire Unchained offers two strong protagonists, a large and interesting cast of characters, and an earthy, dark fantasy adventure that pulls a double shift as both a paranormal romance and urban fantasy. The cover art is gorgeous and appropriate to the story, something I'm allowed to sigh in envy over.

If plots were thrill rides, this book would be a hybrid combo of Shriekra and Space Mountain. The writing is pure adrenalin rush -- you're sucked in on page one and she never lets you go after that. It's difficult to write a story that moves as quickly as this one does and still retain the chilling elements as well as the ongoing moments of dark humor. Larissa manages all three with the skill of a seasoned novelist (pretty cool when you recall that this is her second solo novel.)

Desire Unchained is a full immersion experience -- it can't be skimmed; the story is infused with the kind of world-building that creates a new alternative reality. Everything in this book is layered beautifully, especially the characters -- just when you think you've got them pegged, they reveal something about themselves that makes you wonder what the heck you were thinking. If you're a reader who prefers the black and white type story, with the obligatory Shining Knight, Mary Sue and Evil Overlord triumvirate, then you should probably give this one a pass. Also, vanilla, non-explicit sex scene lovers? No. Not for you.

I really enjoyed the energy coming off the page; you can tell the author had a blast writing it. I also liked the strong subplot that carries over from the first novel with Kynan (but you don't need to read the first book to pick up this thread; Larissa does an admirable job with weaving in the backstory.) The excerpt in the back from the third book, Passion Unleashed should have everyone who enjoys Desire Unchained preordering as soon as they finish the book.

If I can offer any advice to the author, it's for a problem that I wrestle with, too: adding more descriptive and sensory elements. The story in Desire Unchained moves so strongly that at times the action and the dialogue overwhelmed the setting and the colors of this world. I'd like to say I have a quick-fix suggestion for that, but I'm also a dialogue-and-action girl, so it's an ongoing combat situation. What I've been doing is trying to look for more opportunities for fleshing out a scene with color and sensory elements when I edit; at times doing a pass just for those aspects because I know they're an area I need to improve on.

As always, you don't have to take my word for it. In comments to this post, name a book you've read recently that you thought was a real thrill ride (or if you've been thrill-deprived, just toss your name in the hat) by midnight EST on Thursday, February 26, 2009. I'll draw five names at random and send the winners an unsigned copy of Desire Unchained by Larissa Ione. This giveaway is open to everyone on the planet, even if you've won something here at PBW in the past.