I bought a new computer a few weeks ago, a powerful, sleek black 80G monster that by coincidence matches the cover of my next novel, If Angels Burn. 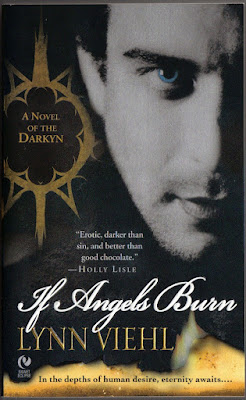 I name all my computers, and this one was Mrs. Peel from the minute she came out of the box. I also bought and built a black and chrome desk for her, and locked her in the bedroom so none of my progeny were tempted to hook her up to the internet. Mrs. Peel is my work computer, and will stay internet-free until she has to be replaced.

Except for a mouse pad, there is nothing in, on or around Mrs. Peel and the desk. The setup looks very futuristic, as if it would fit perfectly in Tom Cruise's Minority Report. I didn't do this for the visual effect but to remove all visual distractions. When I bought Mrs. Peel I decided no internet, and zero clutter; I wanted simply a writing computer and a clean, junk-free work space.

What clutter I have is out at the internet/printer/scanner desk, and that's going somewhere else as soon as I can clear it out. I wouldn't mind having some of the stuff at a writing desk, where I can sit and hand write my journals and letters, but three desks for one person seems a bit much.
Posted by the author at 5:49 AM