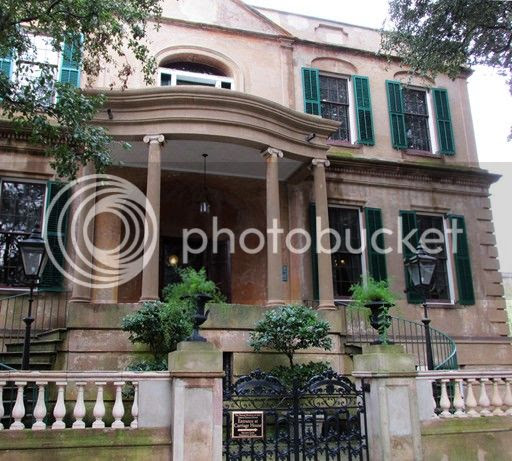 Someday I'm going to write a story with this house as the setting. I've visited it about a hundred times and walked through nearly all of its rooms more than once. I've stood inside and sketched some of the remarkable features, and photographed every inch I was allowed to (the tour people frown on interior pics.) I once sat in the back garden and wrote a poem. Every time I visit Savannah I have to go see it, even if we just drive past the place. The Owens-Thomas House may not be as pretty or popular as some of the other fabulous homes in the city, but it's haunted me since the first time I saw it. Why? I don't know. It's just one of those places where place + person = mystery connection.

While settings aren't my favorite story element, I always try to make mine interesting, and often invest them with some sort of personal connection. The twin staircases in the front of the Owens-Thomas House also lead up to the front entry of Walsh's Folly in Disenchanted & Company. Julian's house in Ghost Writer is based on one we rented some years back while looking for a home of our own. Even Lucan's nightclub in Dark Need from the Darkyn series once existed in real life; in my twenties I worked as a bartender in a place exactly like it.

Naturally your story settings don't have to be based on actual locations (would have been tough for me to do that with StarDoc), but it helps to have some knowledge of a real-world counterpart when you're working in a fictional location. This map I drew of the warehouse I used for a few scenes in Nightborn was not entirely invented; many of the interior features came from my memories of a warehouse belonging to a paper distributor that I once worked for about twenty years ago. That knowledge of the physical features helped me better choreograph the scene because I remembered what was inside, how the shelving and equipment looked, the sort of obstacles they'd create, etc.

As for the story I'm going to someday write about the Owens-Thomas House, I'm waiting for the right inspiration -- and in that setting can help, too. Since the house haunts me for reasons I don't know, it would work great as the setting for a paranormal story.
Posted by the author at 7:00 AM