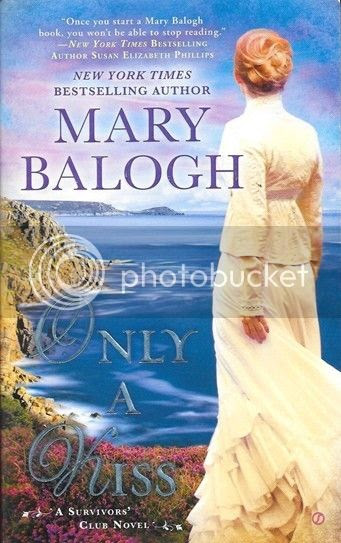 Now that I'm home I can catch up on my blog posts, like my pick for book of the month for October, which is Only a Kiss by Mary Balogh.

Only a Kiss is the sixth novel in the Survivors' Club series, and tells the story of Lady Imogene Barclay, the only female member. To give you a short version of the series premise, the club is formed of seven people who were injured either physically or emotionally (sometimes both) during the Napoleonic Wars and came together afterward to heal and help each other. Imogene is the only female Survivor, and since she was captured by the French along with her husband, the Earl of Hardford, I thought I had her story figured out before I began reading the book. All you really know about Imogene from the previous books, however, is that she witnessed her husband's death, and that she never talks about it. When she's not meeting up with the other Survivors Imogene lives very quietly on her husband's estate in Cornwall, at least until the new Earl, Percival Hayes, decides to finally come and see what he'd inherited.

Mary Balogh is our generation's Jane Austen, and this novel showcases why. In addition to being extremely well-written and deviously plotted, it offers a bit of a role-reversal, with a heroine struggling to deal with her past while being haunted by it, and a lovely, happy hero who shows up to help and change everything in the process. Don't make assumptions about Imogene, either, because when you do finally discover exactly why she's a Survivor it will stun you. I found this story a beautiful read, as well as one that made me cry (the revelation is a heart-wrencher) but that's all part of the very real magic Mary instills in her work. All of the novels in this series are basically standalones, so you don't have to read the previous five to keep up.

Here's where you can buy a copy:

Amazon
Posted by the author at 7:00 AM