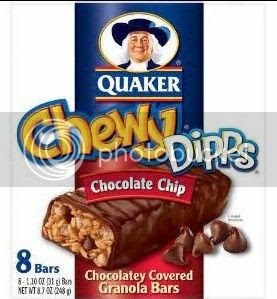 Here's something you don't know about me: Back in the eighties I was a lab rat for Quaker Oats. Or to be more precise I was one of the many volunteer consumers on whom Quaker tested several variations of their new chocolate-covered granola bar product before deciding on the final product.

I was actually approached by a consumer product tester while I was out shopping, and she asked if I'd like to take part in her group. I agreed because free food was involved; also, I loved granola and chocolate, so I didn't think it would be awful -- and it was actually really neat. I was given several boxes with different versions of bars, had to taste each one, rate them, mark a survey sheet and then report my opinions over the phone. I took it very seriously and answered honestly (and got to eat a lot of chocolate-covered granola bars, another happy memory.) The Quaker Oats people in turn treated me with respect and thanked me for helping them out. Since the product has stayed on the market for like thirty years, and it's the version I picked as the best of the test lot, I like to think my opinion helped bring the best form of the product to the shelves.

Most everyone has a personal legend or two in their lives, I think -- being remotely involved with some huge product as I was, or finding something enormously valuable at a garage sale, or having a brush with fame by meeting celebrities under ordinary circumstances. According to family lore, my grandfather, who came down with osteomyletis when my mom was a little girl, was among the first Americans to receive penicillin after the antibiotic was first approved for testing on patients in the U.S. Because at the time osteomyletis was a death sentence, it also saved his life. On the much lighter side of family legends, my mom once bought a dirty but pretty pearl ring at a flea market that she later had cleaned and appraised. Since it was made of platinum and had two nice little diamonds along with the pearl the jeweler valued it at $2,500.00 -- which was ten thousand times what she paid for it. Yep, she bought it for a quarter.

Although I've never met a celebrity under ordinary circumstances I think that would be pretty cool. Singers seemed to gravitate toward my family; while working the makeup counter at a drug store my mom waited on Roberta Flack, who was lovely to her. I definitely envy my brother, who along with being a minister runs an appliance repair business; one time he was called out to Gloria Estefan's house to fix her dishwasher and got to talk to her. Probably the most famous singer-celeb encounter story in our family is the time when my daughter and her classmate ran into rapper/actor Will Smith while they were on a school field trip, and he was kind enough to stop and talk to them, and answered a question my daughter asked him (which is why I will always love Will Smith. He was nice to my kid.) The unifying note in all these celeb personal legends is how kind famous people are when they deal with non-famous people. Generally speaking celebs tend to be very nice people under ordinary circumstances, as long as you're not shoving a camera or something to sign at them.

When you're building a character, consider adding a personal legend or two to their background. This doesn't have to tie into your story if you just want to add it to flesh them out, but very often personal legends do motivate us after they happen. My mom always pokes through jewelry boxes at every garage sale, rummage sale or flea market she goes to, hoping to find another treasure for a quarter. To this day I still buy Quaker Oats products and feel good every time I do. I also try to see in the theater or buy on DVD every film Will Smith makes (there's an example of how kindness to a child affects the kid's parent.) I suspect even my minister brother has a personal collection of Gloria Estefan's albums stashed away behind his Bibles. Connect a personal legend to your character's present and you add depth, realism and fun.
Posted by the author at 7:00 AM