I doubt any writer has saved me more times than a former ambulance driver who considered words his paint and verse his canvas (when he wasn't actually painting a real one.) He was a soldier who hated war, and suffered from depression but despised fear; he was that kind of contrary -- and mysterious and gifted and more lyrical than any man I've encountered on this planet. 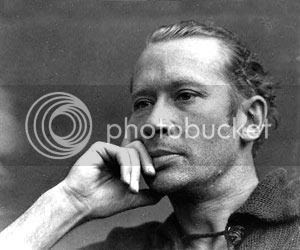 He wasn't perfect by any means. He looked a bit like a seedy ranch hand, and made some stupendously massive mistakes with his choices in love and politics. He could be pompous and unyielding, and probably rode his artistic high horse too often as well. He was brought up to be an aristocrat but lived like a bohemian and adored rascals and heretics. Even in death he had to be different; when he suffered a massive, instantly fatal cerebral hemmorhage, he was on his way to sharpen an ax.

great men burn bridges before they come to them -- e.e. cummings

So how can you be protected by a guy who died when you were in diapers? Edward Estlin Cummings left behind for me a bridge through time and space and life and death, built from the thousands of poems he wrote. And not just any poems. The man sculpted language and ignored rules and nose-thumbed spelling and grammar. He took the much-loved sonnet form and played Twister with it. He spoke from the page with ease and wonder and stunning candor. The first time I read this he had me for life.

Edward may have moved on to the next place, but he has never abandoned me. Just the other day, when I was again subjected to some unnecessary and hateful behavior, he was there for me in his work. I opened a book and retreated from this world into his, and on the other side of that bridge he reminded me once more of the many things he's taught me. When you embrace beauty like this, you make it impossible for anyone to infect you with their ugliness. And when I crossed back over the bridge into my reality, it was like the cruelty never happened.

To be nobody but yourself in a world that's doing its best to make you somebody else, is to fight the hardest battle you are ever going to fight. Never stop fighting. -- e.e. cummings

And this is why we should create instead of destroy, heal instead of harm, and love instead of hate. To build our own bridges for those who need us now, and those who will need us after we're gone. To be there as a sanctuary and a source of reassurance for someone in need of protection, even after we've moved on. Honestly, this is the only immortality worth having.