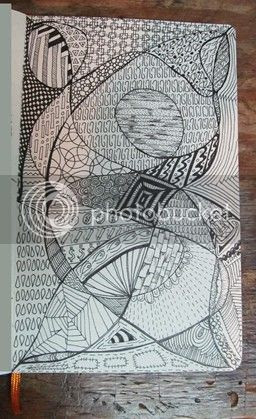 I've been a dedicated doodler practically since the first time I picked up a pencil. Throughout my childhood I would draw blocks, shapes and patterns in small spaces; usually in the margins of my notebook paper while in class at school. The process for me was soothing and curiously satisfying, but the results were always something I concealed or tucked away out of sight -- I suppose I didn't want anyone laughing at me. In fact until Zentangles became popular I had no idea there were other people who doodled as small or as obsessively as I did.

Doodling, which I think practically everyone does at one time or another in life, can be viewed as the art of the subconscious, and it was certainly that for me. I'd never once planned a doodle except for choosing the space in which to draw it. This changed when I learned of Zentangles; the popularity meant I didn't have to hide my strange doodles anymore and there was even a logic and discipline I could now apply to them.

For months I happily Zentangled away on countless squares drawn in my sketchbooks, until one day I began doodling around the square's edges, and beyond them, until I was filling the entire page around my Zentangle with more doodles. Once I crossed the boundaries I suspected I was committing some form of doodling heresy, but it felt right to grow in that direction (I've never been content to color inside the lines for long anyway.)

When I saw Zen Doodle ~ Tons of Tangles, this lovely doodling art book edited by Tonia Jenny and Amy Jones, I thought it would be more of the same squares and fill-in-the-spaces. Once I began thumbing through it I was pleasantly startled to find a collection of gorgeous works by artists who regularly step outside the square to explore the universe of doodling possibility. Some are inspired by nature, online challenges, and even mehndi (the custom of using henna to stain designs onto skin.) 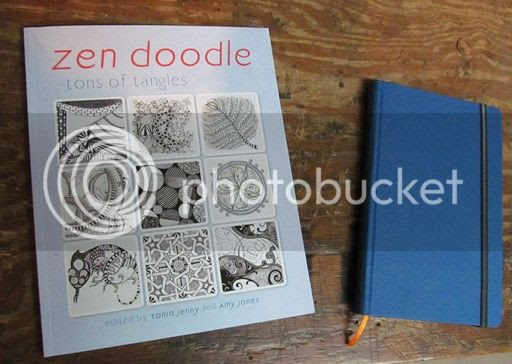 There are four sections in the book that cover abstract designs, shapes & objects, animals & beasts, and friendship & love, but other than those themes each artist brings their own vision to doodling. Along with detailed instructions on how to create some of the patterns and linework, and pictured example doodles in various stages of completion, the contributors also talk about their process, what influenced a particular doodle and other aspects of their creativity. Going through this book is a bit like taking a doodling workshop with forty-two different instructors from around the world. I think it's already had a very positive impact on my Zen doodling: 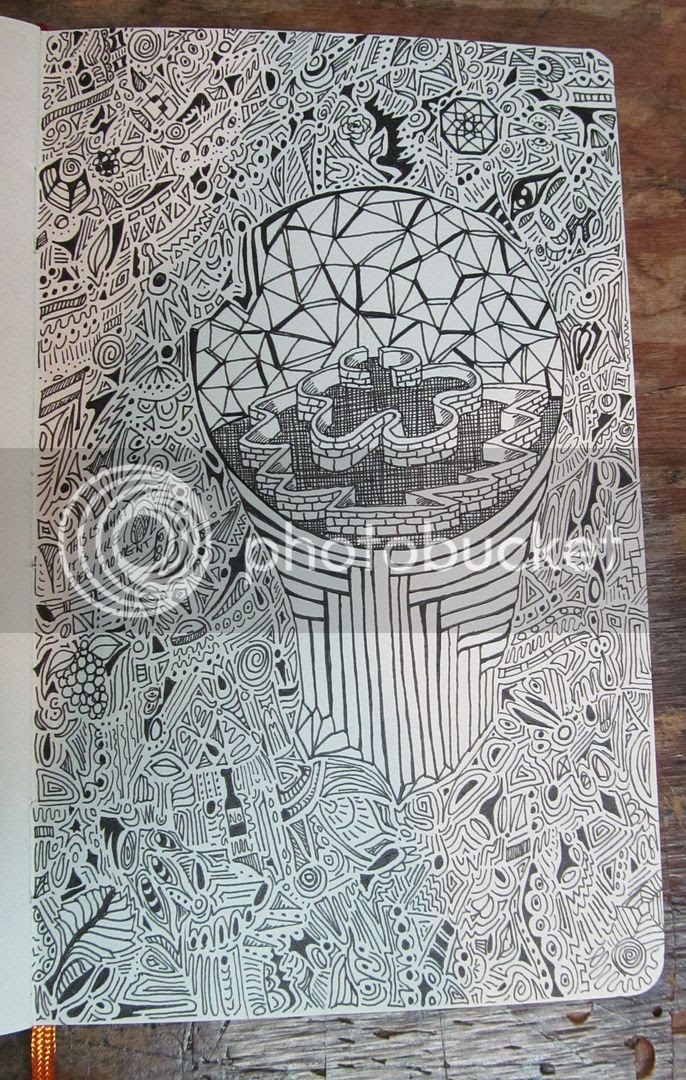 I know to many doodling may seem like a complete waste of time and paper, but you're probably not aware of the benefits. The next time you're on hold with your doctor's office I bet many of you will be drawing tiny 3D boxes on your message pad, or looping a continuous line like a Slinky from one side of an old envelope to the other. You may think you're killing time, but what you're really doing is a form of meditation through the simple beauty of no-stress no-expectation creation -- something I think all of us can use on a regular basis.
Posted by the author at 7:00 AM