There are many kinds of heroes, and yesterday there were quite a few of them trying to help the victims of another despicable, cowardly attack on this country. I actually wrote the following giveaway post (and the title of it, too) this past weekend; as soon as I heard about the bombings I considered holding off on it until next week. But if I can share a book like this, with a story of such hope and heroism in the face of great despair and loss, then it may help someone else who needs that right now. My heart and prayers go out to the victims, their families, and all the people of Boston. 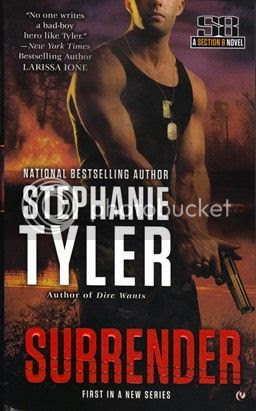 Stephanie Tyler's Surrender, the first novel in her new Section 8 series, is an action-packed romantic suspense novel featuring Dare O'Rourke, a former Navy SEAL and the son of a CIA black ops specialist. Dare is still trying to put his life back together after being tortured and nearly killed during a ruinous mission, but his recovery ends when he's sent to rescue Avery, a half-sister he never knew. By the time Dare finds Avery he realized someone is systematically executing his father's old team as well as their families. To stop the killing, he must find his missing father and take out the traitor -- and the only way to do that is to kidnap his enemy's daughter, Grace. What Dare doesn't know is that Grace barely escaped from her murderous stepfather with her life -- and she's already been warned that Dare is coming for her.

Surrender is a dark, edgy story with lots of twists and turns to be navigated by its unusual cast of characters. Dare and the boys aren't simply unsung heroes trying to get past the ways they've been unfairly judged and treated; they operate in that shadow zone where nothing is black or white. The evolution of the relationship between Dare and Grace was fascinating to follow as it bloomed. Oh, and I'll warn you now, there's a marvelous secondary character named Gunner who will not only steal your heart but he'll probably tattoo something beautiful on it to boot.

As always you don't have to take my word for it. In comments to this post name a series with a first novel you loved (or if you can't think of any, just toss your name in the hat) by midnight EST on Friday, April 19th, 2013. I'll draw four names at random from everyone who participates and send the winners an unsigned copy of Surrender by Stephanie Tyler. This giveaway is open to everyone on the planet, even if you've won something here at PBW in the past.

One final note -- I'm also holding another giveaway over at the Disenchanted & Co. blog; stop in if you have a chance.
Posted by the author at 12:00 AM