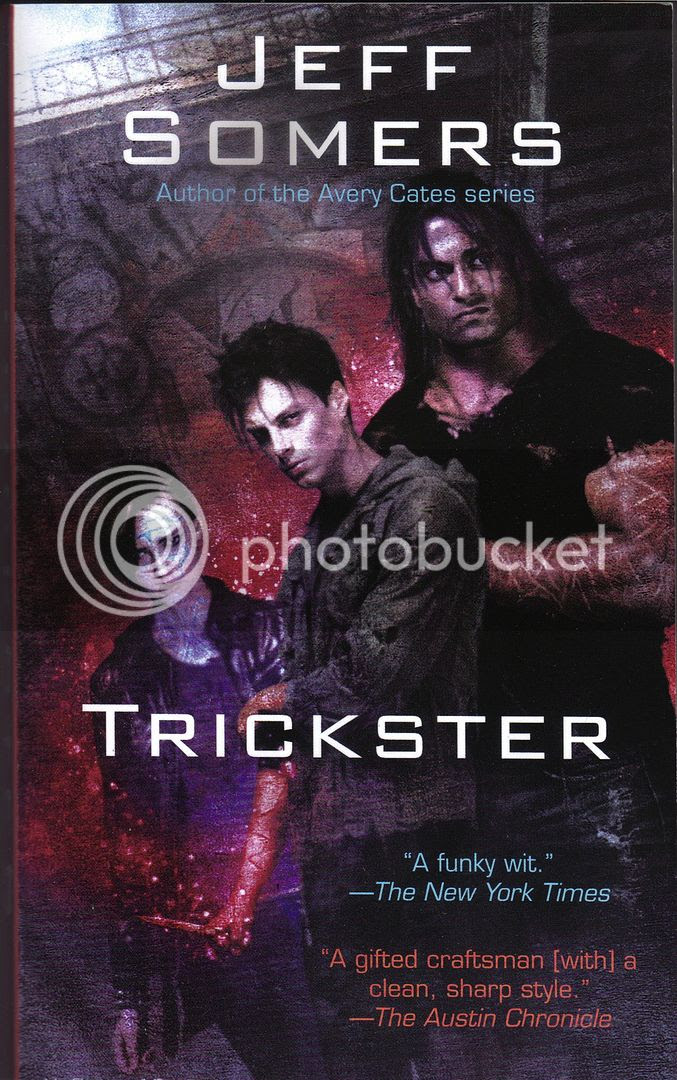 It seems almost appropriate that I started reading Jeff Somers's new novel Trickster during a tornado warning; I'm thinking we should issue one for this author. Not since I innocently and unknowingly picked up Rob Thurman's debut Nightlife have I been so blown away by a new-to-me urban fantasy writer.

Trickster introduces us to Lem and Mags, a pair of magician grifters who barely subsist on the extreme outer fringes of society. Lem is skinny and clever and a screw-up; Mags is huge and not so clever and devoted to Lem. While running small cons (which they mostly botch) they stumble upon a girl named Claire whom they find tied up and locked in the trunk of a car. Even worse, someone has covered Claire's body from head to toe with runes, marking her as part of a very big, extremely dark and utterly mysterious ritual. Lem and Mags know enough about big, bad magic to understand they should run, not walk, away from Claire. When they don't, the ugly party really gets started.

Jeff Somers delivers this story with tenebrous style and sepulchral wit (which he employs mercilessly, I'll warn you.) Think Steinbeck, if he'd had a straight razor's edge and a real attitude problem. You shouldn't expect anything gruesome in this novel to be draped with a doily of politeness or shoved offstage; you definitely will be having tea and cookies with all the beasties in the good parlor. While the characters are demonstrating how unlikable they should be -- as Lem frequently observes about his sort in the story, We are not good people -- you'll be falling in love with them. I certainly have. Also, the magic involved isn't of the Tinkerbell variety; there are always consequences, and most of them are disastrous. The world of Trickster is grungy, bleak and filled with nightmares, and this novel gives you a front-row seat in the VIP section on the tour bus. I can't wait for the next ride, either.

As always, you don't have to take my word for it. In comments to this post, name a new-to-you author you've recently discovered and enjoyed (or if you're in a reading slump, just toss your name in the hat) by midnight EST on Friday, March 1st, 2013. I'll draw five names at random from everyone who participates and send the winners an unsigned copy of Trickster by Jeff Somers. This giveaway is open to everyone on the planet, even if you've won something here at PBW in the past.
Posted by the author at 12:00 AM