Come and See My Etchings

According to the UK's Daily Mail a message etched on a window at Penrhyn Castle in northern Wales has finally translated after 100 years, and reveals a tale of star-crossed lovers. Do read the full article when you have a few seconds; it includes some very neat pics.

One reason I'm addicted to Archaeology magazine is the endless stream of mysterious artifacts that it details; often the scientists who find them can only speculate as to their meaning. Give me an ancient object or location that defies explanation, and as a storyteller I can dream up a novel (or several) to explain it. That's how the copper scroll of Qumran (one of the famous Dead Sea scrolls) morphed into my Scroll of Falkonera in Nightborn; I've always wanted to write a story about that scroll. I changed it from copper to gold, made it Templar instead of Hebrew, and then built the plot for the trilogy from there. 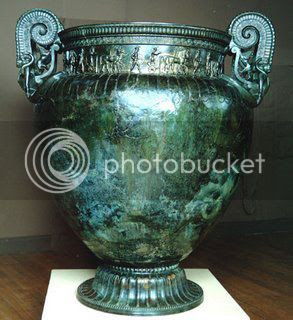 Example: in 1953 a tomb mound at Vix in the upper valley of the Seine was excavated, and inside they found a burial chamber filled with treasures of the past. The woman who had been buried in it was discovered covered in priceless jewelry and sitting in a wagon or litter; she must have been an important gal in her time. What intrigued me, however, was this beautiful bronze crater (a kind of vase used in ancient times for mixing wine) they found in the tomb. It was over five feet tall and weighed nearly five hundred pounds; far too enormous to br practically employed for traditional uses.

So what was its purpose? Was it just some form of sixth-century BC ceremonial hyperbole, as in Look out, Underworld, here comes a real party girl? Or could it have been designed for another reason? Ask yourself: what could you put -- or hide -- in a five-foot-tall lidded bronze vase about to be buried under tons of earth? And what would happen when someone digs it up eight thousand years later?

Not all artifacts from the past defy explanation; often we know or learn what they mean. As stated in the article, the message etched in the castle window has been attributed to a wealthy girl who allegedly fell in love with a gardener and was subsequently locked up by her father in a tower. That doesn't spoil the etching as story material; as a fiction writer you can spin a tale simply by adjusting a few facts. Let's take the romantic message itself -- what if it were etched on the outside of the window, which happened to be located at the very top of the tower, far beyond the reach of any 19th century ladder? Maybe while this girl was falling in love with the gardener, someone or something else was falling in love with her. Something that had been secretly living at castle far longer than the girl and her family . . .

There are endless resources and research sites on history's artifacts available on the internet but it's good to read some real books, too. I first read about the Vix burial in Hilda Ellis Davidson's The Lost Beliefs of Northern Europe, a slim but fascinating book on several enigmatic cultures that left behind few to zero records, leaving us to interpret and theorize about their faith systems based almost entirely on the few myths and artifacts we can connect and recover. Books like this can be a primer for artifact- or event-based storytelling.

Photo credit: Electrum Magazine
Posted by the author at 12:00 AM