Worth a Hundred Thousand Words

Sorry I'm late posting today; Photobucket is being ornery for some reason. 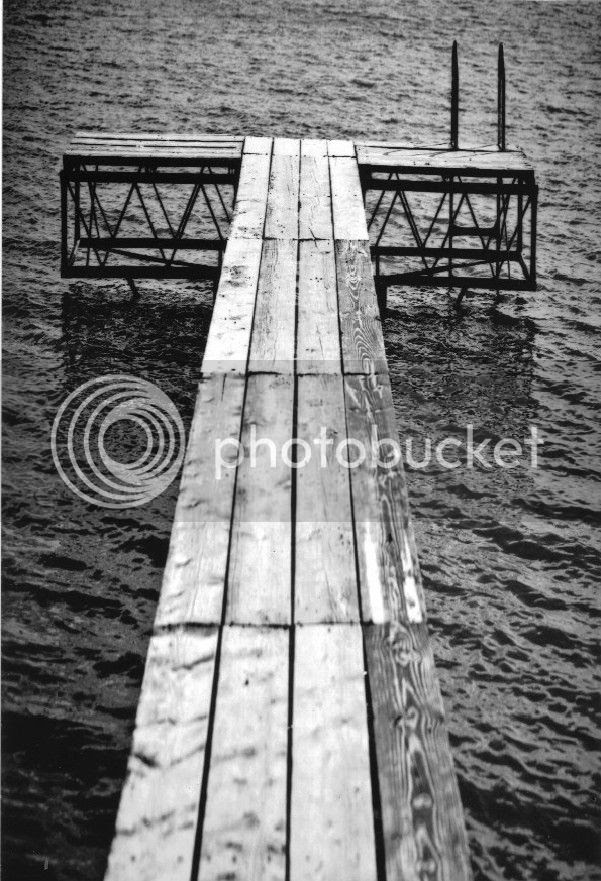 While sorting through a box of photos at my favorite art store I found this uncredited image for sale. At first glance it looked like an illustration of that old chestnut take a long walk off a short pier. Something about it nudged my imagination in a different direction, though, so I added it to my stack of stuff.

Inspiration and imagination combined always produce some interesting results. Although the image seems grim, it delighted me. I've walked along a hundred piers like this because I've always loved the sea at night. I can't even tell you how much of my life I've spent sitting on the sand or perched on the end of a pier watching the moonlight on the water. One of my earliest memories became a journal entry about how as kids we used to spend hours running around after dark rescuing newborn loggerheads. My happy associations then blossomed into a poem about my guy and our magical first date, also at the beach. Now it's starting to grow into a story, and while I'm not sure where it's going, I've learned to leave it alone and give it time to percolate.

A few years ago I took this photo by the sea:

Some of you might even remember the blog post I wrote about it. The inspiration didn't end there; it kept growing in my head until I had the beginnings of a story. As I was outlining the original idea I realized my story pic was bigger than a short -- much bigger. While I had my doubts, I went along for the ride, taking notes as characters and situations began to take shape. As they did the grafitti took on new meaning, which became the flow of the plot as I asked and answered all the questions it brought to me: What makes us master ourselves? What drives us to take control of our lives? What happens to those who won't, or can't? What if someone had the ability to steal that from you, and take you over at any moment, and make you do anything they wanted?

Interested in more? You can read the rest of the story by investing in my novel Nightbred, due out in December.

Expecting a single photo or image inspiration to grow into a book is unrealistic, of course. Sometimes an appealing picture is just that -- a picture that you enjoy or that invokes happy memories. Every now and then, however, you will find an image that is more than a visual delight -- and you'll know it because it opens a kind of window in your head and expands as it shows you what no one else can see. Your job as a storyteller is to show others what you've seen through that window.

You can't do that if you only take a few seconds to look, so give it time. Make a hard copy of the image or photo and keep it over your desk or make it the cover of a notebook. Don't put yourself on a time limit, either; with my Master Yourself photo it took about four years from the day I took the shot to the day I wrote the last word of the novel it inspired. Keep looking at your image, keep thinking about it, and in time you may find an entire new world waiting to be explored.
Posted by the author at 9:21 AM