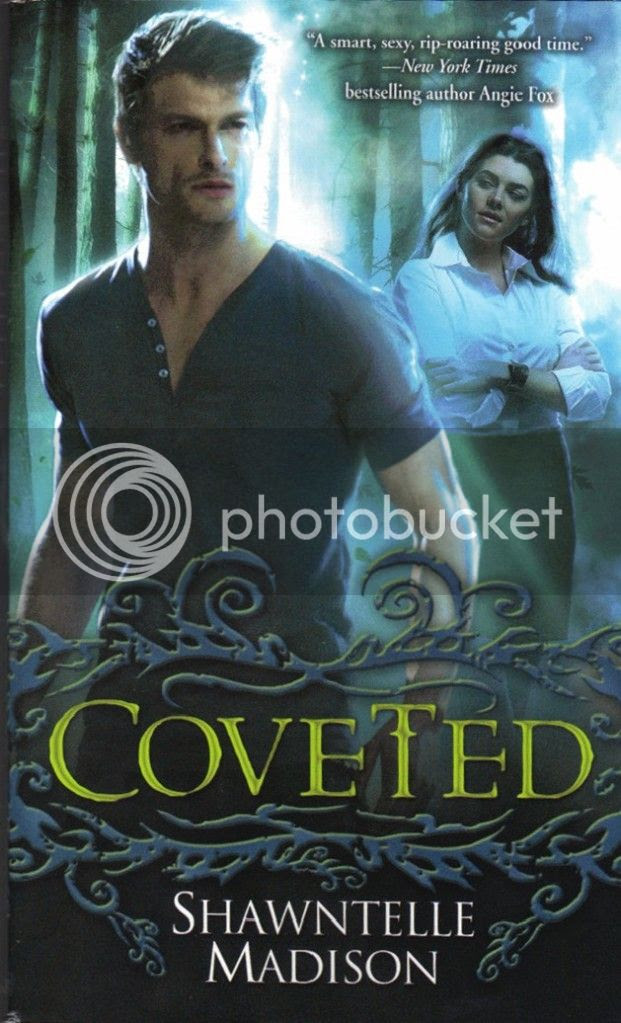 Now that I've waded out from under (most) of the summer's workload, I have time to explore the shelves and discover new authors. Because I was a good scribe and got the work done first I think the Book Gods rewarded me by steering me to a number of great reads, beginning with Shawntelle Madison's impressive urban fantasy Coveted.

You know how often you want a well-written book with a great cast of characters and all the elemental perks but a different story line? Not the same old tired tried-and-true genre tropes but genuinely distinctive; something fresh and unique that reaffirms your faith in fiction? Add to that one which makes you happy about what's being written by the next generation of writers? This is one of those books.

To give you a little on the story: Natalya Stravinsky is a werewolf with two problems. One is Thorn, the son of the local pack leader, an old love who has recently come back to town and of whom great things are expected. Unfortunately getting involved with Natalya isn't one of them.

Natalya also has OCD. Please note, she doesn't have the shallow, occasionally mentioned, pretty, put-there-just-to-give-her-a-nice-flaw variety of OCD; this is the real deal. It's woven in her personality, it got her kicked out of her pack, it's filled her house with Christmas ornaments, and it's seriously screwing with her life. Natalya knows this, and she does want to do something about it. So she returns to group therapy with other extraordinary creatures -- among them, a succubus who can't get a date, a mermaid who's afraid of the sea, a giant-size dwarf, and a handsome hoarder of a wizard. The group is run by a therapist who is also a wizard capable of handling both his patients' special problems and providing ways for them find solutions. Only Natalya has a lot more to cope with than simply her disorder. Someone wants her dead.

Coveted is odd, funny, original and not at all what you'd expect. The writing is excellent, the characters come off so realistic they should have their own reality show, and the story is authentic and original (and I believe this is the author's debut novel, which makes it even more impressive.)

And as always, you don't have to take my word for it. In comments to this post, name the last author or book you've read that kept you guessing (or if you can't think of any, just toss your name in the hat) by midnight EST tonight, June July 7th, 2012.* I'll chose three names at random from everyone who participates and send the winners an unsigned copy of Coveted by Shawntelle Madison. This giveaway is open to everyone on the planet, even if you've won something at PBW in the past.

*Added to correct, and sorry about posting the wrong month. Apparently my head is still in June.
Posted by the author at 12:00 AM