I am not really here; I'm actually lounging around recovering from some minor eye surgery. All went well, although I now know (at least, temporarily) what it's like to be one-eyed. Very weird. I expect tomorrow I'm going to wake up with a stupendous shiner. I was going to tell this risque joke about a one-eyed man and a parrot, but the language will kill my blog's G-rating, and then Disney will never buy the rights for a cartoon series.

I'm kidding. Seriously. I'm holding out for an HBO series.

Tami mentioned in comments yesterday that the cover model for Shadowlight looks like the same model on Gena Showalter's The Nymph King. I'm not sure; I was told that they didn't put the model's entire head on my cover because he was bald and had no eyebrows. Since my vision is at 50%, I'll let you guys tell me -- do you think it looks like the same dude? 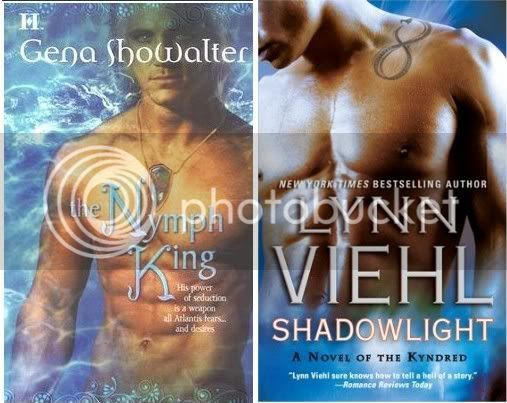 And to complete this very lazy and discombobulated post, I've put an excerpt from the second Kyndred novel, tentatively titled Dreamveil over at the stories blog (it was that or pics of the eye, which I'm really trying not to inflict on anyone.)
Posted by the author at 12:00 AM