Remember way back last April when I told you that this book was going to rock the genre? Not that I want to rub it in -- well, yeah, I do -- but there's another novel soon to be released that's going to raise the bar again: 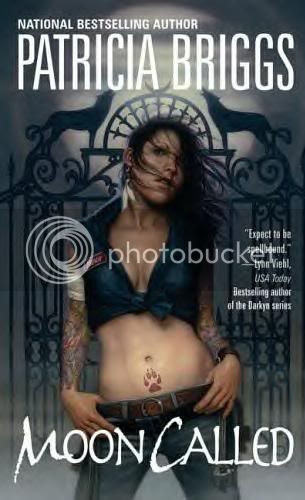 Many of you know Patricia Briggs from her fantasy novels The Hob's Bargain, When Demons Walk, Dragon Bones, and Raven's Shadow. If you've read her, you know how good she is. She's what we call a writer's writer; the kind other authors read for the sheer pleasure of seeing it done right, and who is already so good that you don't think she can really get any better.

Moon Called is not just better. It's brilliant.

With this novel Patricia Briggs kicks off the story of mechanic and skinwalker Mercedes (Mercy) Thompson. Mercy's got her share of troubles, which include changing into a coyote, a dark and disturbing Alpha werewolf neighbor, vampires with car troubles, and all manner of fascinating Otherworld creatures being forced out of hiding by modern technology. When Mercy hires a young drifter to work at her garage, she has no idea the chain of events she sets into motion -- or how quickly all hell can break loose.

I loved how smart this book is, along with the world-building, the characters, the plot, and damn near everything about it. As much as I enjoy her fantasy work, it's so cool to see Patricia write in our world (which she promptly rebuilds to suit herself, but then, don't we all?) My only complaint: I have to wait months before the next Mercy book comes out. I should bribe her editor or something.

Moon Called will be hitting the shelves on January 31st, but if you'd like a preview, you can read the first chapter here right now.
Posted by the author at 12:00 AM