I met an adorable prince today at MegaCon (and his Dad was pretty cute, too): 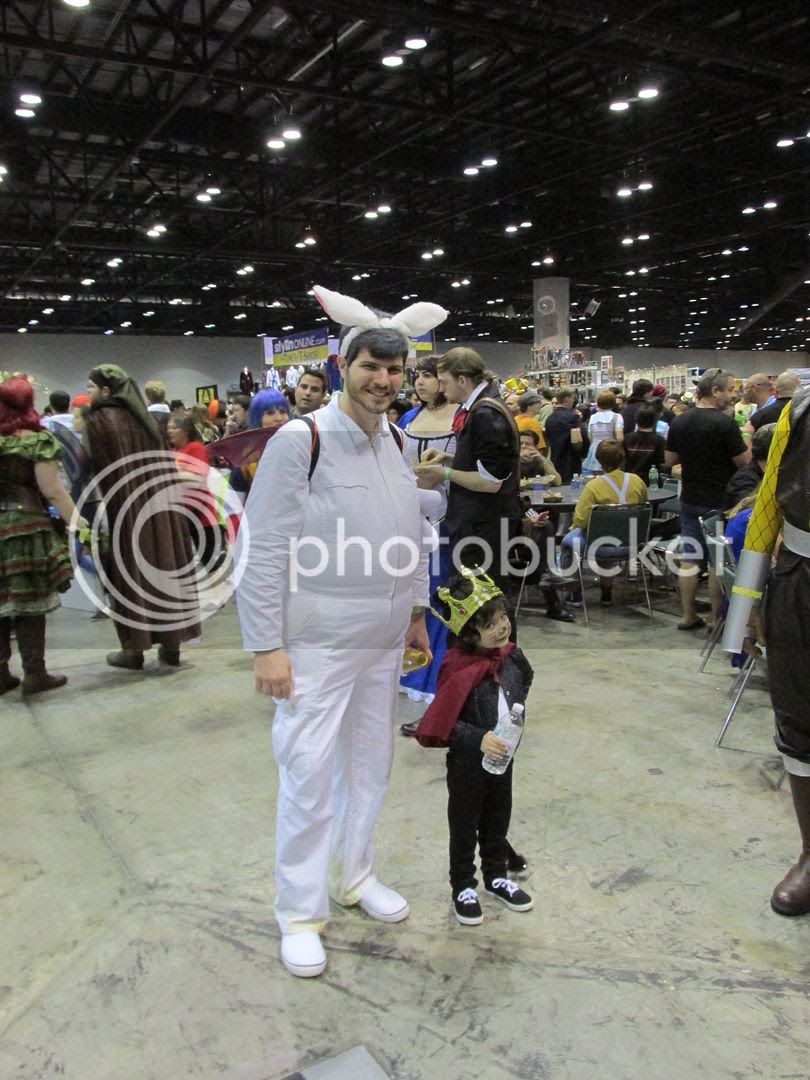 We'll be finishing up today, so if you're attending please do stop by our booth to say hi and enter your name in the Final Day Booth giveaway. Meanwhile, here is today's blast from the past post:

"Ms. Hartlace," Janey said over the intercom. "There's an agent who would like to speak to you."

Senior Editor Agatha Hartlace chewed the last piece of her doughnut and swallowed before she punched the reply button. "Tell whoever it is that I'm not in today."

After a pause, Janey said, "Uh, Ms. Hartlace, he's standing right here with his assistant. In my cubicle." She lowered her voice to a whisper. "He's carrying, like, swords."

Takamori, of course. Only he would have the nerve to show up without an appointment. "That's why I said to tell him come in." Agatha switched off the intercom, turned off The Young and the Restless feed on her computer, and brushed away the powdered sugar that had fallen on the front of her blouse. "Idiot temp."

Takamori entered the office and came to stand before Agatha's desk. His gleaming black hair was pulled back in a perfect chomage. He wore navy blue kamishimo and hakama over his black kimono, and two swords and a dagger thrust through the left side of his black silk obi. Agatha smelled cherry blossom and oiled steel as he offered her a shallow bow.

"Takamori, what a nice surprise." Agatha shuffled a stack of rejection form letters that needed rubber-stamping. "How are you?"

He folded his hands inside the wide ends of his sleeves and regarded her without expression. A petite woman in a pink kimono embroidered with white cranes stepped out from behind him and bowed.

"I am Natsu," the woman said. "I will translate what my master says into English for you."

"Okay." Agatha found it highly annoying that Takamori understood English perfectly but refused to speak it. "What can I do for you and your boss today?"

He was just trying to psyche her out; Agatha knew that. But he never blinked, and she wasn't sure he was even breathing. "Or should I say, what can I do for your client?"

"My master says that the perfect manuscript is a rare thing," Natsu translated. "He says that you could spend your life looking for one, and it would not be a wasted life."

Agatha forced a smile. "He should talk to my mother sometime."

Takamori spoke again, with Natsu translating almost simultaneously. "My master says that his writer is an honorable author, with talent as endless as the stars. His writer wishes to write more novels for the House of Penguins, and offered you three most perfect proposals."

Takamori took a folded a contract from his sleeve, dropped it like a used tissue on the edge of her desk, and grunted.

Natsu gestured to the contract. "And you sent him this?"

"I did?" Agatha picked up the contract and skimmed the top page. "Oh, right, the one for the next three books. We're very pleased with how the last one sold." She checked through it. "Seems in order." She glanced up. "What's the problem?"

Natsu looked at Takamori, who drew his katana.

Agatha put down the contract. "Whatever it is, I'm sure we can work it out."

Takamori drove the tip of the katana into the worn carpet and drew his wakizashi sword.

"I don't understand," Agatha babbled, staring at the razor-sharp edge. "I thought our contract offer was very generous--"

Takamori placed the shorter sword across his palms and offered it to Agatha.

"As my master has no Kaishaku-nin," Natsu said, "he would be honored and grateful if you would behead him after he disembowels himself."

"Mr. Takamori!" Agatha jumped to her feet and backed away. "Natsu, tell him that there is no reason to commit hari-kari over an unsigned contract."

"Seppuku," Natsu corrected gently as Takamori placed the shorter sword on the desk. "For ninety years, the samurai of my master's agency have protected and fought for their writers. My master is the last, and now . . . he cannot stand the shame of defeat."

"This is a very nice offer," Agatha said firmly, and faced the samurai. "Takamori, I know you understand me. You also know how hard things are for the publishing industry now. Your author should feel grateful to have the work."

Takamori opened his upper garments and slipped out of them until he was naked to the waist. He dropped down and tucked his sleeves under his knees.

"Why is he doing that?" Agatha demanded.

"To prevent himself from falling backwards," Natsu said as Takamori removed a long dagger and contemplated it. "A samurai agent should die falling forward."

Natsu gestured as Takamori took the hilt of the dagger in both hands. "If you would please stand behind my master, Miss Hartlace? You must cut off his head as soon as he slices open his stomach."

"Wait," Agatha begged as she saw him invert the dagger. "I know we can work this out. It's the advance, isn't it? I could do a little better for him. Maybe . . . two thousand more on signing?"

The tip of the dagger stopped an inch from Takamori's navel. The agent did not look at her.

"Three thousand," Agatha said, and gasped as he drew back the dagger for the final thrust. "Five thousand!"

Time crystallized as Takamori breathed in deeply. Agatha didn't exhale until she saw him lower the dagger and mutter something.

"My master says his writer will be displeased with him," Natsu said, her black eyes filled with delicate sorrow. "But he believes he can persuade him to accept such terms. You will issue a revised contract by Friday?" When she nodded, Takamori rose to his feet, sheathed his dagger and swords in his obi, and bowed.

Natsu did the same. "We are most humbly grateful for your understanding and generosity, Miss Hartlace."

"You're welcome. Have a nice day." She watched the pair leave her office as silently as they had entered before she collapsed in her chair. She groped, found the intercom button, and pressed it. "Janey?"

"Get legal to issue a new contract for Takamori's author. Increase the advance on signing by seven thousand." Agatha opened a desk drawer and took out a roll of TUMs. "Then call that ninja agent I was not supposed to see at two and reschedule. I'm taking the rest of the day off."
Posted by the author at 7:00 AM

Labels: blast from the past week