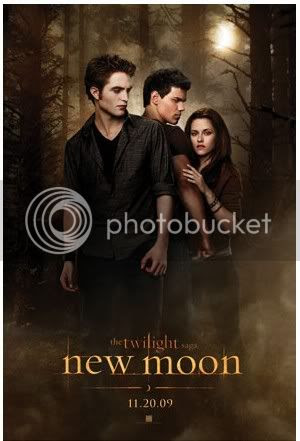 The kids and I went on Saturday to see New Moon, mainly to avoid all the crazed Twilight fans who packed the theaters for the Thursday midnight and Friday shows. Still, the show we planned to see was sold out when we arrived (15 minutes before start time; traffic on the way there was really heavy) so we bought tickets for the next show and went and had a leisurely lunch.

When we came back for our show, they sent us to the largest stadium-style theater, and it was packed to the rafters. I actually had to sit in the row behind the kids because we couldn't find enough empty seats together. I'm going to do this again, too, because while I could keep an eye on them from where I was, I didn't have to put up with trying to watch the movie amidst a thousand giggles, whispers and Omigods from the girls.

Overall I thought the movie was okay, and stayed pretty faithful to the novel, although I only read New Moon once so don't quote me on that. I liked the characters of Jacob and Carlisle best, and they both made the movie for me. The filming was beautifully done, with plenty of interesting angles and special effects -- and please note, computer-generated stuff never bothers me because I'm too old and near-sighted to tell if it's real or it's digital; your mileage may vary.

I still didn't like a few things that were carried over from Twilight, like the weird vampire makeup and the odd-colored contacts they wear. I wish Emmet would get more lines and screen time; he's fun. The scenes with Victoria running through the forest were a waste of film. Most annoying/overdone detail: there were so many audible gasps and other breathing sounds from Bella's character I felt like I should be yelling for a rescue inhaler every time she came on screen.

The violence wasn't too over-the-top, but there seemed to be a great deal more of it in this movie compared to Twilight (it's been a while since I saw the first movie, though, so I may have forgotten it.) I saw a lot of very young kids in the theater, and personally I'd be very hesitant to bring a child under the age of 13 to see this movie.

If you're going this week, buy your tickets in advance and get there early to see what sort of lines you'll be dealing with. The show after ours had at least three hundred people waiting in line by the time we came out.

New Moon is a long movie, clocking in at 2 hours 10 minutes, so definitely hit the restroom before it starts and don't drink a vat of soda during the film.

Having a healthy lunch immediately before the movie provided an unexpected bonus; no one wanted the movie theater's very unhealthy popcorn, candy or sodas when we went back for our show. Probably saved me at least $40.

You might consider pre-screening the movie yourself before you bring kids who are easily impressionable or under the age of 13 for a couple of reasons:

-- The romantic content remains hugging and light kissing only, but there is definitely more of that, and a building adult theme to the relationship between the protagonists.

-- The werewolves are not of the drippy or gross variety, and the transformations are almost instantaneous so you don't even catch it if you blink, but there are several group attack scenes and one battle between two werewolves that might frighten a little one.

--There was also a lot more implied/offstage violence, as when they lead a large group of unsuspecting tourists (including a small child) in to the Italian vampires. You don't see anything, but you do hear screams begin and none of the heroic characters do anything to intervene.

-- I thought the most graphic scene was one that showed a before-and-after manual decapitation of one vampire by another. It wasn't bloody or extended, but it was brutal and disturbing.

My two hardcore Twilight fans said it was better and much more exciting than the first movie. So it made the kids happy, although the girls were completely on the edge of their seats during the very last scene, which ends on another Bella gasp. After that both girls swore they'd have to be first in line to see the next movie, which means we'll be doing this again in June 2010, when Eclipse hits the theaters.
Posted by the author at 12:00 AM