We've hit the one-week mark for National Novel Writing Month, which is a good time to stop and take a look at how the work is going. With my normal work schedule I tend to work six days straight and use the seventh to look back, decide if I need to adjust something, and then take care of the thousand small details that I set aside during the writing process.

Some examples from my NaNoNovel: this week I had to coin about thirty words as I needed them to appear in the story; today I'll make sure that I'm happy with my choices as I update the novel glossary. I've brought in three new secondary characters; I'll update their character worksheets with bits about them from their scenes. I also like to keep a running list of tertiary or background characters who are named or described so I don't populate the story with any who are interchangeable or confusing with another.

Because I'm fond of several letters and tend to overuse them, one of my tricks with character naming is to make up two alphabetical lists of given names and surnames by letter, leaving open the letters I haven't used in the event I need another new name in the story. This prevents me from having a story overrun by J-named characters or those who all have surnames that end with -an, -er or -et.

My energy level and interest in my story is still in the high ranges, and I hope yours is, too. But if mine weren't, this would also be the day I decide if I want to keep going or scrap the WIP and do something else. No matter how carefully I plan -- and baby, I am the Queen of Planet Plan -- I really don't know until I've written a story for a week or two if I'm going to be able to move in and live in it for the next five to eight weeks. That said, once I make that one-week commitment, I will not stop until the story is finished, no matter how plodding or stressful the writing becomes. As much as I dislike working on a story that loses my interest halfway through, I hate unfinished manuscripts even more.

I'm glad I was able to write a little extra each day and buy myself two days off from NaNo to rest and think and reorganize my thoughts, but if something hits me this weekend that I need to get down on the page, I will write more. Even my days off aren't set in stone; I think you have to go with whatever the work demands (as long as it's reasonable.) 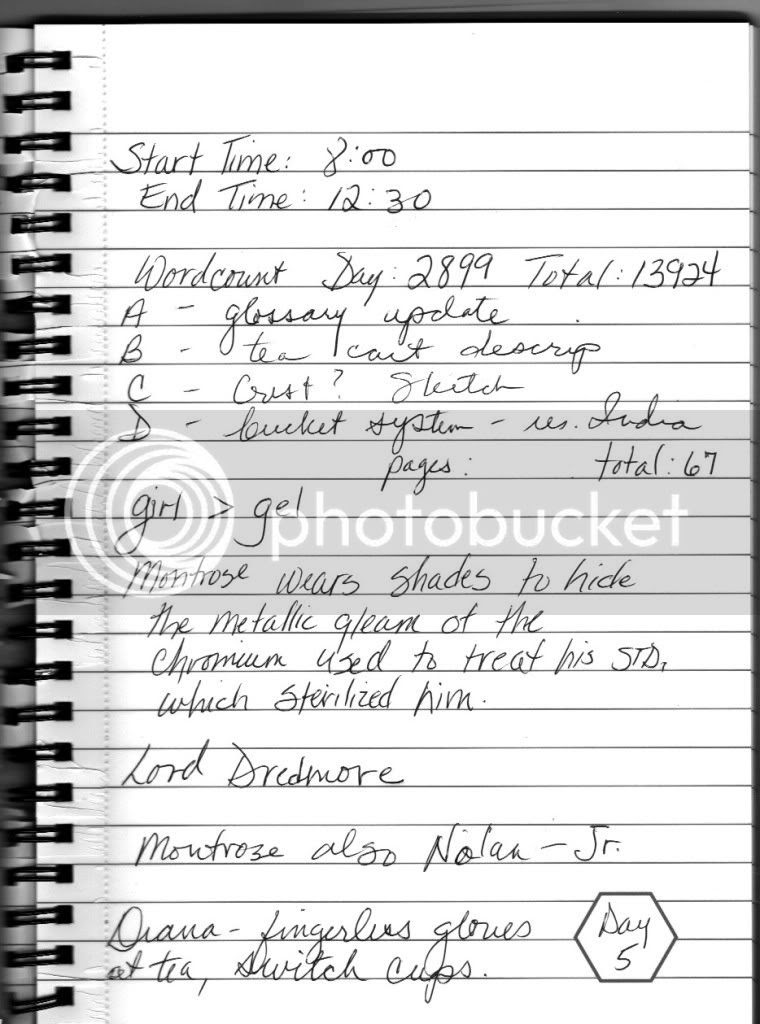 In my daily NaNoNotes book (to see larger version, click on the image) I've been jotting down some reminders on things I need to research as they come up in the story. There's a system of catering in India that uses metal buckets to deliver hot lunches to working people in the cities (and this is just a vague memory of something I watched once in a documentary.) My "D" note is a nudge to research that real-world practice in order to doublecheck the logic of the world-building I based on it. I'm also probably going to meet with one of my life-experts this weekend for lunch and a Q&A I need to prep my question list so I can thoroughly interrogate him about what I need to know about his field of expertise and put together a convincing character who does the same thing. Life-experts are great because they can give you insight and behind-the-scenes info on their specialties that a writer can't usually find in books or other types of research (and while I've worked a lot of jobs, I've never been an animal control officer, a magician, a professional interior designer or the quarterback of a school football team.)

As you new NaNo'ers move into week two, you may find that the bright and shiny aspects of writing a novel are starting to flake off and it becomes a little harder to hit that keyboard every day. Until you reach the midway point (25,000 words written) these feelings may grow stronger and/or try to derail you. Don't let them. Once you hit the midway you begin to see the glimmer of the finish line ahead, and that will tug you through the last half of your writing experience. Your job now is to get to the place where that happens, even if it means slogging through the next seven days of writing.

Also, if you haven't knocked out as many words as you expected this past week, don't let that defeat you. I think the first week is really a time for you to settle into a writing routine of some sort, and develop good writing habits to carry you through the rest of your WIP.

So how do you guys feel about surviving the first week of NaNoWriMo? Let us know in comments.
Posted by the author at 7:09 AM