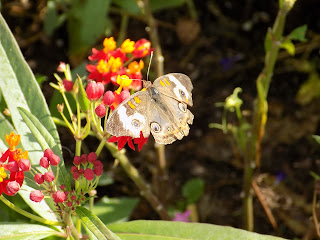 Every time I come back to blogging from a hiatus I always feel I must apologize for being absent -- and I am sorry to stay away. This time my excuses are fairly hair-raising, but before you read on know that I am on the mend.

Back in February I started losing the vision in my left eye. Again. You know that saying where someone is walking around in a fog? For a while there I was, literally. Everything I saw out of my left eye seemed engulfed by a white mist that just kept growing more opaque. The right eye seemed fine, but I had a problem there, too. It made it very tough to focus, and by the end of March I'd gone half-blind. My surgeon diagnosed me with PCO, or in layman's terms secondary cataracts, in both eyes. Just before the laser surgery to clear it up I was taping my left eye shut just so I could stop walking into walls, tripping over the dogs, etc.

It was the month before the surgeries that proved more challenging for me. The impairment came out of nowhere, at a time in my life when things have been actually good for a change. Since it's been four years since my last eye operations I didn't think I'd have to go through it again. Thus I had to cope with lots of negative emotions before I went under the laser. My guy was my rock, as always, and he's the main reason I got through it okay.

All my angst turned out to be wasted. Both surgeries were a success, and my doc fully restored my vision. 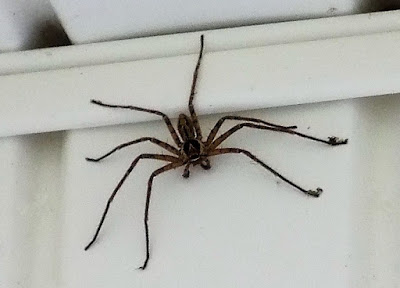 After the surgeries went so well I joked with my guy that I would probably pay for it in another way -- and I did. A week after my vision was restored and I was cleared to drive again, I went to pick up my guy from work. Without any warning another, non-life-threatening medical condition of mine flared up, and I had to pull off the road. I was in no state to drive for a few hours, which unfortunately stranded me in the middle of nowhere.

I did call my guy to come and get me, but I didn't know exactly where I was, so I had to describe what landmarks I could see. I knew once he arranged another ride it was going to take him a while to find me. While I was waiting for him two Good Samaritans pulled over, and after I explained the situation said they would wait with me until my guy arrived. It was broad daylight, and they seemed very nice, so I wasn't scared. Until they robbed me, which was the real reason they stopped, and left me there.

Honestly, I didn't care about the $26.00 they stole; if they'd asked me for it I would have given the money to them. It was that they robbed me because I was alone and in trouble.

Of course it could have been much worse, and I'm blessed that all they stole from me was a little cash. It's the unfairness of it that still needles me. I can't tell you how many people I've helped in similar situations. Accident victims, homeless folks, lost kids, elderly people needing assistance, people whose car batteries had died -- when someone is in trouble I always stop and try to be a Good Samaritan. We all do, don't we? Because it's just the decent thing to do. Yet the very first time I'm in need of one, I get robbed.

I do learn from my mistakes, and that won't happen to me again. After this I won't trust in the kindness of strangers. It's sad, especially because I've always believed people to be decent enough to do the right thing in bad situations. Not going to automatically assume that anymore.

That's all the hair-raising/depressing stuff. I feel a bit like I'm been repeatedly kicked in the teeth, but also very, very lucky, which is a weird combination. Throughout everything I've been able to keep working. Writing for me is the most healing thing I do. I've also immersed myself in a lot of other creative ventures that helped me cope, starting with making this quilt: 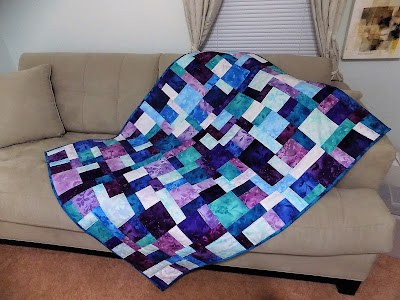 It's the first one I've ever made from a kit (available at Craftsy.com), and while I made some mistakes I think it came out well. I learned a lot from working on it, such as never to cut fabric when I'm half-blind.

I've been cooking quite a bit, too, and trying new recipes. The online cooking community is awesome when it comes to sharing simple, delicious dishes. At Domesticate-Me.com I found a pretty fabulous one-layer chocolate cake recipe that has no butter or eggs, and is topped with whipped cream and fresh berries (as you can see I cheated a little and added some mini chocolate chips with the fresh strawberries I put on top.) I served it as our Easter dinner dessert, and my crew went wild over it. 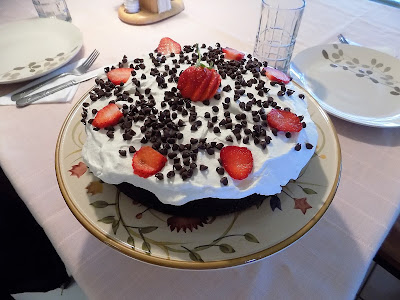 It has been a tough couple of months, but I can see clearly now, and that's what matters. Giving up has never been my thing anyway, and I'm not about to start. I've got so many other, better things to do.

So what have you all been up to? Let me know in comments.
Posted by the author at 7:09 AM