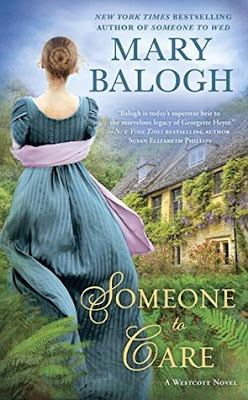 I haven't had much time lately for pleasure reading, but I have knocked out a couple of books by two of my favorite authors this month.

The first is Someone to Care by Mary Balogh, the newest novel in her Westcott series. This one tells the story of Viola Kingsley, the former Countess of Riverdale, who is the mother of many of the characters in the series. Throughout the saga Viola has been the most interesting character to me, as she was the primary victim of her dead husband's bigamy. The revelation of that in the first book instantly made all her kids illegitimate, took away all their titles, ruined their futures, destroyed her and her family's standing among the ton, etc. If anyone should be beyond pissed by the lying bastard's duplicity, it's Viola.

She's managed to hold onto her dignity, but finally breaks at the very beginning of this story and takes off, leaving her troubled family behind to finally get some alone time. I sent up a silent cheer, chapter one. Lord, what this woman has been through in the other books. Soon temporarily stranded at an inn in the middle of nowhere, Viola meets Marcel Lamarr, a cynical and dedicated womanizer who tempted and tried to seduce her two decades ago (she was married and told him to go away, and he went.) As you might guess the flame's still there, but this time Viola has no wedding ring or legit reason to resist it.

I won't spoil things by getting into the nuts and bolts, but it's already my favorite book of the series. I rarely use the term star-crossed lovers to refer to characters, but oy, Viola and Marc are definitely that. It also features older protagonists, which as an older real person I appreciate. Romance in later years is usually more interesting than the young stuff. The first chance at love in what is only very loosely a second chance at love plot is fun, too. There's lots of emotional turmoil, and in that regard I think it's some of her best writing. Highly recommend. 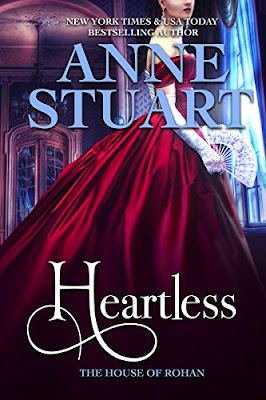 I had to read Heartless by Anne Stuart on the Kindle my guy got for me for free by redeeming some gift points so I could read another, Kindle-only title by Anne Stuart. Actually the only reason I will ever use a Kindle is for Anne Stuart, which should illustrate how devoted I am to her books. Anyone else and I wait for the paperback or read something else.

Heartless is an indy-published continuation of the author's very wicked House of Rohan series. It tells the story of two very damaged characters from those books, Brandon Rohan and Emma Cadbury, whom you might remember as secondaries from the cast of Shameless. They've both been through hell, so it's nice to see them get the chance to heal each other. You don't need to read the other books to follow their story, but you'll want to read them after you do. After I finished Heartless I got out the other four Rohan books and reread them just so I could revisit the old stories.

The House of Rohan series is not for everyone, especially readers who don't want sex in their romances. I do, but I mainly read Anne Stuart for the characters and the impossible situations she puts them in. She's the master of dark romantic conflict. Also, I like the dark aspects -- it's a nice change to see a terribly flawed protag who generally isn't the stuff of heroes. I get tired of the ones who seem to do nothing but suck up to the heroine. The sweet, loving perfect dude never appears in this author's work, and most definitely not in this series.

So whatcha reading? Let us know in comments.
Posted by the author at 7:00 AM