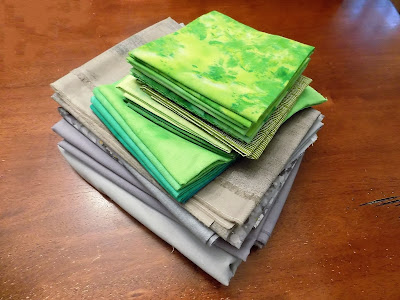 This pile of fabric looks harmless enough, right? Not when I look at it. It's the makings of a quilt I've wanted to create for about a year now, ever since I came across a pattern called Zen Garden. It's not a complicated pattern -- I'd say confident beginner level -- and it requires only skills I already possess to put together. I've practically memorized the pattern by reading it a couple hundred times. I worked it out in my head, and then on paper, and did the math involved and whatnot. Not a problem.

Only the more I looked at it, the more it became a problem. It's not what I thought of as a Zen garden. It was a boxy bunch of plain blocky rocks with a couple squares of color. What I really wanted to do was tweak the pattern, use more color and alter some of the design and fabric choices. I wanted weathered wood in my garden. More green, too, I love green. The fabrics would have to be very specific to what I saw in my head. I'd have to swap out two of the piecing steps and reinterpret the gray fabrics. I came up with major plans for the hand quilting, too -- hundreds of circles, like ripples on the still surface of a pool, instead of the recommended straight line work.

I couldn't leave well enough alone. Everyone else might be happy enough to follow the pattern faithfully; I wanted to take it in different directions. Story of my creative life, really. Where people see instructions, I see the gardens of possibilities just beyond them. And that scares me, and often I put it off because I think on some level I want to be like other people. Or I'm not as brave as I think. Or maybe I envy people who can follow a pattern without a problem. Sometimes I just procrastinate. Other times I end up paralyzed by doubt.

After going through another bout of temporary blindness and being robbed this year I'm tired of being scared of the things I want to do. How long have I got left to do them, anyway? So I've finally gathered the fabric and and started cutting. I've another day or two of that, and then I'll begin piecing.

Now, that little bitch of doubt in my head is already sneering that I've used too much green -- and she thinks it's acid green, not the spring green I see. Also, just FYI, she says the quilt will be a disaster because I suck at cutting precisely with my arthritic hands. Doubt thinks instead I should work on the other kit quilt I bought (and follow the damn directions.)

I don't care what Doubt thinks. If it's more acid than spring green, great. If it ends up crookedly pieced because I cut badly, fine. I'm doing one thing that scares me because I want it more than I want to be scared of it. I'm making this quilt the way I see it in my head. I'm not sewing this quilt for Doubt. I'm creating my vision. I'm doing this for me.

Now apply that to writing, scuplting, painting -- anything creative thing you want to do -- and do it. That's my message today. Do the one thing that scares you, in the exact way you want to do it, because only you can -- and you aren't immortal.
Posted by the author at 7:00 AM